From the Czech Republic we have the band Heaving Earth who have returned with their sophomore full-length effort entitled “Denouncing The Holy Throne”. There seems to be an outpouring of bands who have a “Satanic” or “anti-Christian” theme now days, but regardless of that, Heaving Earth have returned with a monstrous passion for death metal. This is an album, that once you press play, it sneaks up on you and slaps you upside the head, then moves in for the kill. There is a lot of great talent here and you can be sure that the handful of smaller releases and the 2 full-lengths is only the beginning for this band. Having only been around since 2008, there is absolutely no doubt that these guys have mastered their craft in a matter of only 7 years. There are some bands who have been around twice and 3 times as long and don’t sound this good.

I usually start out by talking about the guitars but in this instance I need to make a comment about the drum work first. It is absolutely insane! The drums really jump out at you in the first track. Sounding like a grindcore/black/death metal blast beat of destruction, the drums just drill right into your brain from the get go. The double bass is equally as sick. I really like the drummer’s style on this release. His ability combined with the obviously flawless production of the drum tracks, make the purchase of this album, based on that aspect alone, worth it. While being labelled a death metal band, it could easily be assumed that Heaving Earth could easily go technical or more grindcore if they ever chose to do so. The same could be said of the band concerning the guitars. While most of the riffs exhibit a straight forward death metal vibe and influence, which I would say resides somewhere around the year 2000 mark, there are little flickers and vibes of black metal and grindcore infecting the overall feel as well. Most of them are subtle hints but become more noticeable the more you listen to this CD. Try picturing “Gateways to Annihilation” era Morbid Angel to newer Behemoth material with Misery Index being the cherry on top. This is such a “true-to-form” album and should appeal to a great deal of the death metal lovers in the world. Definitely a resurgence into what absolute 100% pure extreme death metal should sound like, compared to the uninventive coattail riding metalcore bands that seem to be pouring out of the wood works. And, if this is a resurgence into the true sound of death metal, then let this album lead the way and be the blueprint for bands and generations to come.

I highly recommend this band and CD if you are into the bands mentioned above as well as: Hate Eternal, Sinister, Nile, Malevolent Creation, Monstrosity, older Hypocrisy, and Suffocation. This album was released by a label called Lavadome Records. I have never heard of this label before, but they now have my attention with the release of this fantastic CD. Monstrous and enthralling from beginning to end. This band will be a force to be reckoned with for years to come, and considering this is only their second full-length, I am quite sure they have a lot more to offer fans and the world of underground metal. 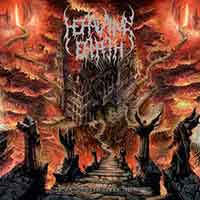