This is a band from the Ukraine who plays Thrash/groove styled music. I am immediately drawn to the release based on the PR material stating notable guest musician Jeff Waters – Annihilator appears on the album.

Rather than bay area or typical European thrash, this sounds like early British bands like Xentrix, I mainly attribute this to Alexander Baev’s vocal delivery that is aggressive in nature providing that much loved vintage thrash package. It is an album that is very comfortable, all the trademarks are included, there is furious fast delivery on ‘Bottom Line’ and sometimes this becomes limiting as you do have to check which track you are listening to in the early half of the album as it sounds rather similar, but there is a cool buzz, a spark of excitement. Groove is always included in modern bands musical output, there is no denying the 90’s influence, as much as I would personally like to forget about it! However, when playing open strings there is a touch of South American Sepultura sparks of energy igniting that modern groove touch paper and that is pleasing. Jeff Waters plays on ‘My Doll’ and the sound is quite dark and boggy in places, but I cannot deny a certain level of enjoyment. I am a bit perplexed, I find this enjoyable but at the same time, you have probably gathered that I an very indifferent about the release at the same time.

This is what it is, this is a cool starting point for me with this band, so we shall see if there is more development, but as this is album number three I am not convinced. However, Hell:On (previously known as Hellion) on the whole are interesting if not ground breaking. 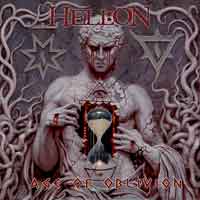