This is a 5 band split release of some brutal death metal. This is no trip through the enchanted forest, this is gloves off music, perverted, degrading to women and nasty, just like it always has been.

Incineration (3)
These guys are from Greece and this is slamming death metal with real obscene vocals, I call it pig squealing, I am sure there’s a more appropriate or less degrading term to use, but all in all, its popular within this scene. The guitar sound is extremely compressed and quite lo-fi in production terms which doesn’t help the snare drum sound. The lyrical content is typical of deranged perverts with such wholesome titles as ‘Atrocious Reek of Clitoral Decay’. Musically, when the snare slows down, the music shines through which at times can be pretty cool. ‘Fresh Corpse Fellatio’ uses a sound byte at the start for which I am sure I have heard somewhere before, although it seems to be common practice in some parts of the world to hear news reports of mortuary technicians being caught having “relations” with the corpses they are working on and general abuse of the dead. All in all, some good moments, especially the little bass run on ‘Defeating the Trinity’, but for me the vocals are something I never get my head around.

Paroxysmal Butchering (4)
This is US brutal death metal from California, the sound is powerful and much more beefy with infinitely more clarity in the mix, a much deeper snare tone is employed too which helps the strength of the songs immensely. ‘Ignition of Racing Thoughts’ has a slower groove, choppy and precise mixed menacingly with some chaotic time signatures. ‘Killed and Drilled’ has a cool tight opening riff, a more guttural vocal style and that’s much more decipherable as a result. By varying their arrangements, Paroxysmal Butchering ensure they show much more expansion when this occurs. A track like ‘Perverse Metamorphonsis’ is pure and simple bare knuckle brutal death metal that knocks you sideways and pummels you into the ground. This is a pleasing set of tracks, yes indeed.

Abdicate (3)
Have a real chunky sound which is compressed to oblivion but the jewel feature of this one of the more standard death metal styled tone with a tail end rasp in the vocals (but unfortunately without any standout change in actual range). With only two tracks on offer, they have a lot to prove in such a short space of time. ‘Devoured’ does pummel hard, it does follow the tried and tested path of other brutal US death metal bands, well, it’s going to be hard not too if you are into the game sort of style. Pinched harmonics override a slower guitar in places, with the powerhouse drums in the background, the effect works well. ‘Of Emptyness and Splendor’ vocally becomes more aggressive, a little squealing in places with the time signatures changing to that slower guitar pace and rapid drumming style to the other end of the spectrum playing fast as the proverbial in quick succession. There’s a strange mix here, so I am not convinced.

Catatonic Rigidity (2)
This band are quite a mystery, little information exists, and their single track contribution to this 5-way split follows a similar path to that of Incineration vocally (squealing and regurgitation) and musically, albeit slower. This sounds like a drum machine, although I could be wrong, it has those drum fills that I find are just too fast for any human to produce, even though the pace of ‘Corridors of Consumption‘ is rather slow and dredging like being stuck or bogged down in the mud whilst wanting to travel somewhere immediately. This doesn’t really offer anything much for me, the overwhelming presentation doesn’t help any hope of clarity being represented.

Goemagot (3)
These are the technical masters of this split EP, unfortunately only one track also, but hey, good things come to those who wait. Sweep picking is in plentiful supply and with less use of compression, ‘Bigotry’ sounds much more expansive, although when they change from the battering ram tempo, things become a little messy and very chaotic. With this one track they try to do so much with it, too much for me, it’s screaming inconsistency, but underneath the madness, if you are a guitar nut, this is the band to take note of on this 5 way split. 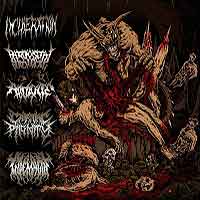