It isn’t very often a band can throw some big surprises in with their debut album, but Finland’s I Helvete does just that with their deceptively short debut “Sinisten Puiden Niitty.” There is A LOT going on here with 6 tracks, and one would think that they were in for some long, epic doom metal album, but I Helvete only touch on the doom elements, and that is mostly with the melancholy tone and added instruments like piano, backing choirs, or violin.

The overall sound of their music is more melodic death metal mixed with black metal, and a track like ‘Kunnes…’ sums it up. Opening slow with a doomier elements thing speed up more into melo death territory with a mix of deep growls and then more of a black metal-esque shriek before closing out on a somber, melancholic note with the piano and heavier, slow churning guitar. It is a wonderful mix of heavy and soft, relying a ton on instrumentation vs being oversaturated with vocals. Vocally, the band is diverse, which is always like because it prevents listeners from feeling the album is one sided. The riffs and song structure can sound the same after a while but if the band keeps up a multi prong vocal approach then it is very hard to even catch that pitfall. Tracks like ‘Pohjaton…’ shed the snarls and shrieks for more of a grated, spoken word part and rather engaging groove laden riffs. The snarls and emotional shrieks are there with the backing choirs, and the track has a whole Insomnium or Omnium Gatherum feel to it with its icy tone, but compared to the others it is just a well rounded melo death piece.

Other tracks like ‘Laulu Itselleni’ really slow things down, almost devoid of any melo death elements and embracing the doom fully by adding in an unnamed guest female vocals and violin, once again broadening the scope of what I Helvete can do. The slower doom approach isn’t quite pit starter material, but on an emotional and melancholic level it should appeal to even the most steadfast of doom/ gothic doom fans. The changing group vocals also add more dynamic. Then the huge surprise hits at the end as most of the tracks end up being about 4 or 5 minutes. The closing ‘Hirsipuu’ which brings things into epic territory at about 11 minutes. Mixing just the right amount of doom and melo death the tracks crawls along at an unsettling pace, so those not used to epics might find it a bit hard to stomach. The journey is well worth it through everything as the varied vocal styles, mix of black metal, melo death, and the soft closing piano of doom at the end just culminates everything that I Helvete tries to deliver on their other 5 tracks.

While this closer might not be as emotionally hitting or as heavy as the other ones, it shows the band pushing their boundaries which is always appreciated. Overall, this is an excellent debut drawing in a lot of different genres and hopefully listeners. While the language barrier might be a bit hard to get past, the music is more than engaging enough that the average listener who doesn’t speak Finnish probably won’t care as they are swept away by the emotional weight of the music. “Sinisten Puden Niitty” probably ranks on a melancholic and heart wrenching level that can be compared to Shining “V” and while not a suicidal journey, they dark album cover with the hangman game does evoke a certain sense of grim soul sucking that makes I Helvete a force to be reckoned with. 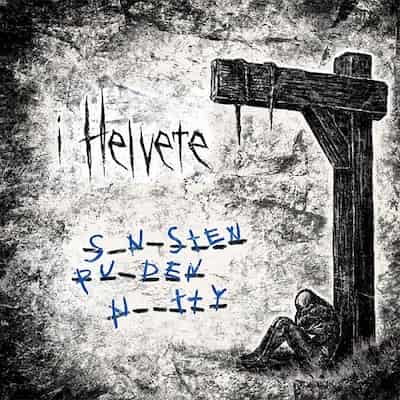