Illdisposed is a very well known death metal band from Denmark. They first appeared in the scene in 1993, and since then they’ve made their name bigger by releasing respectful death metal material. “The Prestige” is their 8th full – length album, released by AFM records, after the band’s break up with Roadrunner records. Illdisposed’s sound used to be typical euro-death metal, as it started in the early 90s, in the style of old Asphyx, Benediction, Carcass etc….4 years and 2 albums ago, they tried to experiment with their sound, be more melodic, modern and technical (I’m talking about “1-800 vindication” 2004 & “burn me wicked” 2006 albums), experiment that didn’t go so well in my opinion.
Fortunately “the Prestige” is here to wipe all doubts out and ensure us that Illdisposed hasn’t forgotten how to play good old death metal yet! So this is what you’re going to listen to in this record: Solid, technical riffing, fast thrashy rhythms, vocals from hell, many melodic leads and some really cool mid tempo parts. In a few words a total come back from a band that was there in the beginning…….enjoy!!! 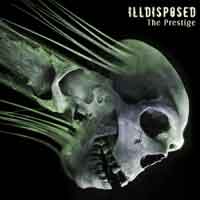