Infected Chaos has been around since 2014, and despite a four year gap between albums, this Austrian group have not lost any steam with their third full length album, “Dead Aesthetics.” Drawing on a sound that sounds like Amon Amarth meets mid era Vader a bit, one has a basic death metal album with tons of melody and groove that takes it above the average comparisons to being a knock off of Decapitated or Hypocrisy. The big draw for listeners is going to be the guitars. Right from the opening ‘When Yonder Calls My Name’ one has the foreboding build of a melody before the song explodes into more familiar Immolation blast beat territory. The clear production prevents the guitars, vocals, bass, and drums from competing with one another and the growled vocals are varied enough between the deep grunts and mid paced snarls that they don’t feel one sided such as compared to a group like Torture Killer. The churning drum patterns are certain to keep anyone awake and overall this serves as nice introduction to what Infected Chaos is all about. Other tracks like ‘Hollow Chars’ shed the melody for a more thrashy, aggressive approach, whether it is with the guitar solos or bass, and this is where one can sense the more Vader influence as opposed to the melo-death chug of Amon Amarth. Still, the band finds lots of room for groove to prevent any second of the track from being stale.

As the album progresses, one will start to hear a pattern of the swap between faster, heavier Vader style tracks and the more anthemic, epic melodeath of Amon Amarth. ‘And Thus I Fell’ riffs definitely ring of some of the more mid paced, slower Amon Amarth tracks and then again we get the faster, heavier pieces with ‘Death Metal Shock Prayer’ that pull back to the more traditional death metal sound. It sounds a little bit back and forth as the album trades styles, but Infected Chaos do their best to try to not let any track sound completely the same. ‘Death Metal Shock…’ is a great example of how the band takes a very basic structure and tries to turn it into being anthemic, and while this track holds the most groove, the variety between riffs and overall darkened sound tends to dry up a bit faster compared to a track like ‘Gehenna,’ which has an balance of the fast and slower parts of what Infected Chaos has to offer. The band fortunately tries to mix things up more by adding more thrashy elements with the track ‘Pitch-Black Fever,’ avoiding the foot stomping rhythms of Vader and just creating a very solid, aggressive death metal track that has some melodies in the guitars comparable to that of faster Hypocrisy songs.

As the album closes out, it sounds like “Dead Aesthetics” aim more for a melo death exit. ‘Away’ and ‘Of Death and Birth’ deliver their slow churn burning melodies that unfortunately lack the energy of some of the faster tracks, but are no less biting in their delivery as they hit hard and deep with the riffs. The vocals still come clear and brutal as ever and have that extra crunch to the growls and the drums hold their anthemic pace. The other nice thing about the album overall is that is long- almost an hour- showing that Infected Chaos can craft a well designed time length on a track anywhere between 3 to 5 minutes, and avoid the pitfall of making a track too short, therefore not making listeners feel cheated of time. There is plenty of time to let each track sink in, letting listeners absorb the full message. While the album doesn’t have the longest tracks on it compared to some of their earlier work, there are certainly some of the better riffs and song structures presented here so far in Infected Chaos’s career. "Death Aesthetics" is worth checking out for anyone who likes their death metal still hard, but with plenty of groove and melody to be softened up just a little bit to make it quite accessible. 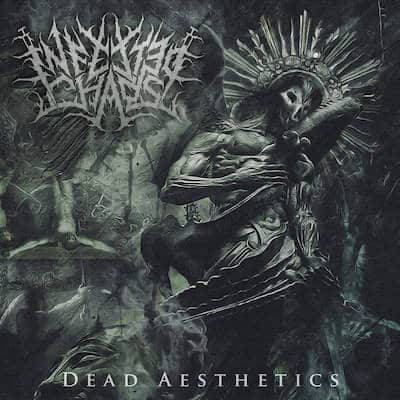