So here we are again listening to a new release from those butchers in Kaotoxin Records. A label well known for its taste in extreme quality! This time they strike with a split CD and it is an amalgam of hate and wrath expressed through the wave lengths of grind core terrorists! Infected Society, F Stands For Fuck You and Miserable Failure. 4th Release for the first one and debut release for the other two. So, "grindcore in three flavors for the blastbeat gourmet!" says the label, and here we go.

Infected Society are a not so out of the blue  band, as their members also play in bands as Yyrkoon, Drowning and Decline Of Humanity. Extreme grindcore served right up your face! This is their contribution in this split CD, and I can't say I found a moment of rest in their 7 songs! They sure know how to create the war atmosphere someone would expect from a band like this! Awesome production and I think they are the ones with the best vocal flow in this release!

Moving on, and while we try to tie up the wounds they caused, F Stands For Fuck You come to make their statement, and believe me, they make the continuation xtra bloody with songs as 'Zero', 'Fit', and 'Fuck Off'. A little less relentless than the first one, having a bit more breaks  and stuff like that in their music, but trust me, you won't even try to catch a breath cos their breaks, or even their atmosphere moments only serve the purpose of the nightmare element before they start grinding again! Aaaand of course it couldn't be done differently cos when we talk F Stands For Fuck You, we talk about members from Benighted.

Grind n roll is what they say they play and of course we cannot argue. Last on this war platter are Miserable Failure. The perfect band to close a split like this. The two first ones chopped us in thousand pieces, and those freaksters, buried us under 10 tons of concrete! They are from the three bands, the one with the most distinct, vocal variations, as they like to double them with a bit more power violence type of voices. They also are the band that tends to touch crust a bit, as the other two are mainly grindcore. Songs like 'No More Friends' and 'Inside Me' will touch you instantly, without this meaning that the rest will go unnoticed.

All three bands are from France, and all of them think and act from fast to-ultra fast. You know what I mean? This is no release for the week hearted! Full speed ahead and grinding it again and again until you feel your eardrums break! A true must for the fans of grindcore. No excuses here! 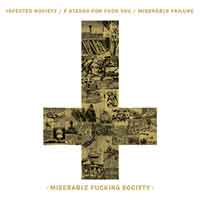