Iniquitous Savagery - Subversions Of The Psyche

After the EP "Compelled By Perverse Immorality", the Scottish band Iniquitous Savagery return with their debut album "Subversions Of The Psyche" which is being released by Grindethic Records. Expect nothing but brutal and aggressive death metal with dense guitar riffs and blasting drumming. This album has been recorded in Germany's Sound Lodge Studios with Jorg Uken and the result is one pretty good sounding record.

Iniquitous Savagery take their inspiration from the old records of Deeds Of Flesh and Suffocation mixing them with equal doses of slamming madness in the vein of Devourement. Josh Roberts' growls are deep, nasty and fit well with the brutal musical bashing that is happening in the background. The title track 'Subversions Of The Psyche' is standing out with its beginning of rolling drums and heavy guitars. 'Subjugated Into Pathological Servility' reeks from all its notes of Cannibal Corpse and it's another bloody winner. Iniquitous Savagery are far from bad in their brutal death metal league but they also don't bring anything new and fresh to the scene. This is the next brutal death metal band which you can hear everywhere these days. But if you still can't get enough of these bands, this album is not a bad choice after all. 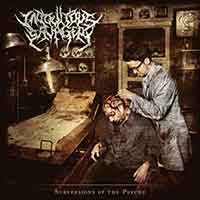