After a 12 year absence Into Darkness main man, guitarist and vocalist Sebastard returns with a new rhythm section and a new album.

"Sinister Demise" ticks all the boxes of what I want from a death metal album, it has its roots in the old school but isn’t restricted by it. Looking forward while knowing its history. What I like also is the dark atmosphere; there are subtle melodies and licks worked into the songs to give a fearful morbid feel. Just listen to 'Three Rulers Of The World'.  It leans towards Decapitated and Vader territory with little technical parts here and there but they only ever serve the song and never get self indulgent. I like on 'Manifesto' how the song slows down into weird little section before blazing back into brutality, the riff towards the end is just delicious!

If it suffers anywhere I’d say the album lacks a little distinction and the songs are quite forgetful. The album plays well and is enjoyable while it’s on but nothing really sticks in your memory for long, which is a shame because it’s far from bad. While it serves its purpose well enough I can see it fading into the background once a better album comes along. With that said, at 33 minutes and the average song length at 3-4 minutes its works as a short sharp death metal fix. 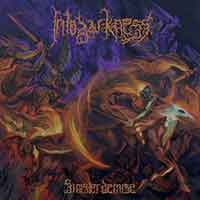