Spain’s death metallers Irredemption have been quiet for some time. Last time they put out an album was back in 2005 so it is a little surprising to see this late 90s death metal band back in full swing almost 15 years later. Sounding like they never changed, the music is still rooted in the 90s style with a lot of comparisons to the likes of Suffocation or even Dismember for the rather lo fi buzz saw sounds of the guitars. “Eternal Mutilation Of Saturn” is as raw as an album can come without sounding like a demo and is chock full of mid paced to fast tracks with dark, fuzzy overtones. Tracks like ‘Saturn’ and ‘Wartime’ churn with doom laden groove and stop and go chugs that break up the intense speed of the drums which make them explosive bangers. A lot of the riffing here definitely draws on the faster death metal groups so those looking more for melodic will not find that here, but those looking for the likes of Helslave or even Deicide will really enjoy what Irredemption has been holding onto all these years.

While the instrumentation is sure to blow listeners away, the vocals can be hit or miss, if not more so a miss. Going for that cavernous, guttural echo seems to have a funeral doom effect but with the blunt force trauma of the music behind it they just seem to get lost in the mix, especially because it is impossible to understand them. On a track like ‘Desert Eyes’ they feel separate and not really as part of the mix as they should be. However, on other tracks like ‘Obscene Forms’ and ‘Infidels Ceremony’ the cavernous tone of the vocals are used to great effect, especially when they almost sound like throat singing/ growling. It is raw, doomy, and makes the album stand out, but on a lot of the other tracks it just feels buried and chained.

Such as on ‘Aggression Agreement’ where they spew forth but sound more gurgly than anything, creating an ugly atmosphere that matches the tone of the guitars and drums, but feels like they’re overdoing it. There even sounds like some clean singing as the band tries something different and go for a classic heavy metal route but it just distracts more than helps. Listeners will either love or hate the music for that, but aside from the vocals there is a lot of brutality in death metal to enjoy here. The grinding rhythms of ‘Lay Yourself There’ despite the vocal approach will certainly be pit starters at shows and the melodic sci fi touch of ‘Outro’ has some potential that the band could have expanded on for progressive elements, but hopefully in the future they’ll use more of such things to really flesh out their rather twisted form of death metal. This album might not be for everyone but after 15 years it is good to see Irredemption can still bring some heavy hitting riffs to the music world. 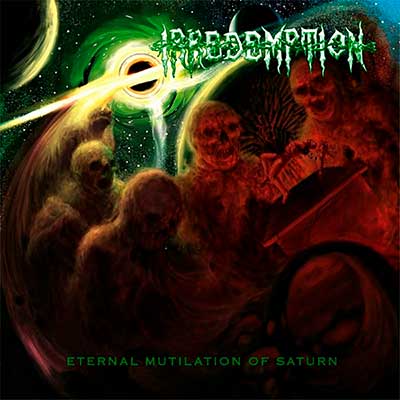