Formed in 2007, Melbourne’s Jack The Stripper have cemented their reputation in Australia’s metal scene with their fierce and innovative brand of chaotic hard core, a relentless work ethic and an atypical, ferocious on-stage prowess. Considered by many to be a boundary-pushing, total sensory-inclusive, interactive extreme experience, and one of the most incredibly intense live shows on the circuit today. The band’s candid and visceral approach has gained them many plaudits from both fans and critics alike, leading them to be listed as “The best heavy live performance in Australia” by Triple J. The band released their first E.P “Black Annis” in 2009. The band proceeded to tour Australia and began building a name for their stunning live shows. They released their first full length “Raw Nerve” in 2013. A record that ‘I Probably Hate Your Band’ proclaimed as “up there with the giants of the genre.

There is rather an epic feel to Jack The Strippers blend of metal, as it roars intensely and swaggers to its own tune! The name suggests a comedy take on a serious subject which is quite clever although probably gives off the wrong vibe where metal is concerned, although the album cover relays a lot of mixed emotions.

Raw Nerve – One minute and ten seconds of engaging metal can be experienced here, and just whet’s the appetite for what is about to follow…..

Nibiru – The damming vocal hatred is surrounded by a grueling beat and raucous rhythms that take the fever pitch to monumental heights. The monster has been unleashed!

United In Guilt – is a startling rampage of fueled malignancy as the vocal scourges singe the tender flesh of the ears and compels the listener to an inch of their lives in a brooding contagion.

Track Marks – very bold and forthright the discordant ear-piercing vocal squawks out a brutal and un-harmonious endeavor, although the music is quite melodic in its own way and is very addictive!

Black Hole Fetish Love Is Cheap – the essences here are brutish, raw and damming! The climate is one of extreme aggression with nightmarish scathing vocal.

Long Night In Hades – the chanting makes this track appealing in a raw sense of the word. The high pitched noises and low toned growls snarl every which way in a compelling melee of emotion!

Torrance – sees the introduction of a female voice sample that is quickly replaced by a thunderous roar. Its tinny mish mash of guitar and drums are an instantaneous hit as it seethes to its close.

Out Of Your Reach – The rawness continues with unabated hatred and anger as the far reaching screams push the boundaries with eager intent. The music is compelling and once again reveals its angry nature on the innocent.

Aghast – will strike the fear of terror into you make no mistake! The fast paced fever pitch returns once more in a frenzy of smouldering metal that sounds sinister in approach and devours on impact.

Nothing Changes – begins with an eerie squeak of frets that morphs into a forthright drum beat. The vocals are unyielding and contain more power than a nuclear power station.

Grinning Death – plunging the listener into a nightmarish revelry, one can only hope they make it through the other side unscathed! Hardly likely as the music grips with a cast iron fist and does not let up until its grisly end.

Summary
The slings and arrows from Jack The Stripper are superbly rhythmic and contagious and they really alert the senses in a striking and bold way. The vocals are deliciously grating and virulent along with the music. Energetic and punchy it comes together in one swarming mass of unadulterated metal that more than whet’s the appetite for people with sheer combustible imaginations!

It does contain melodic pangs although it concentrates more on being totally hellish and raw, certainly living up to its title. With this type of metal the diversity can only be stretched so far, although it does give off a riveting character that screams in all the right places. No matter where you turn there is always more brutality to be had on ‘Raw Nerve’ and Jack The Stripper know just how to turn on the charm and engage fully with its audience! 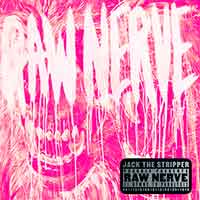 Self released
Band: https://www.facebook.com/jtsmusic
Reviewer: Pagan Hel
Jul 20, 2016
Next review: Deathkings - All That Is Beautiful