Jag Panzer - The Scourge Of Light

Jag Panzer have been around for some time- since the early 80s- but have had a strange string of releases. After their debut in 1984, they waited ten years till 1994 to release their next album (not including in between demos), and then in the early 2000 just seemed to really get inspired and cranked album after album every year, or twice a year. Suddenly in 2004 they stopped again, and have been semi-silent until 2011 to unleash their latest release, 'The Scourge Of Light.' Like so many other releases before them, the band tends to keep the music in the same vein of power/ heavy metal that they did in the past, and as a result, fans should be very happy.

On the other hand, maybe they won't be to happy to know that Jag has not changed their sound much. The band still relies heavily on the guitar and vocal focus to deliver a mix of hard hitting rock and metal with great clean vocals that can hit some pretty impressive high notes, but at the same time, when listening to tracks like "Condemned To Fight" and "Overlord," it makes fans wonder if they've heard it all before. Other tracks like "Bringing The End" have a more rock based chug that sounds a bit more modernized, but still, it doesn't do much for the overall genre sound. At least the keyboards provide some great backing instrumental effects for a bit of a symphonic feel without being too consuming. In fact, with "Overlord," it feels like it is more of a folk/ fantasy element.

Perhaps the best thing that Jag has done is brought back the epic. "The Book Of Kells" is one of their finest tracks to date and also the longest since "Tragedy Of Macbeth" from 'Thane to the Throne.' "Book..." is heavy, epic, and almost like a entire soundtrack to a great battle scene from some movie like 'Heavy Metal.' The keyboard elements do a great job at adding plenty of beauty amongst the dragging chug of the guitars, but still, after a while, it feels like things are pretty repetitive until the guitar solo. If a fan is looking for variation, one should hear "Burn" which features some great piano (intro and outro) with a foreboding guitar tone along with some great chorus group vocals mixed with the usual ones heard during the verses.

For Jag Panzer fans, 'Scourge...' will continue inspiring them as it has before with little change or need to evolve so much that is becomes a shadow of its former self. New fans may take some getting used to the album, and while this may not be their best, can still attribute to a band that has been going for so long, mainstream or not when it comes to album releases, that they've still got what it takes to put out some pretty damned heavy metal. 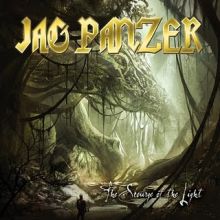