Sometimes I wonder about nothing. Twan ask me to make a review for the newest output from Jesus Cröst, a grindcore hooligan whatever band from the Netherlands. Me as a german fucking-football-world-champion 2014 and by the way as a football hater and especially I hate the hooligan-scene. So its really evil what Twan asking for – lol. Ok – facts at first. Maybe than it’s easier for me to be a little bit objective.

Jesus Cröst from Rotterdam/the Netherlands founded in 1996 as a crust project but during the years and more that 100 shows musically they become more powerviolence/grindcore and today the band called it something like hooligan-grindcore or whatever. And I don’t know, is this just ironic or not. And after I decide that it must be ironic, I can live with the whole concept. Even as a football hater. The newest output, which is on my turntable now, is called “1986” and you see on the cover the the final between Argentina and Germany in Mexico. The game ended 3:0 for Argentina. Obviously an allusion to the German. I think it’s a funny idea to make such a cover in the year in which is Germany football world champion.

I hear 22 songs in just 15 minutes on this album. Longest song 1:27min and the shortest 0:15min. And yes the drums are really fast and brutal. The guitars fast also and simple enough to be cool and understandable but not boring. Just the right mix for grindcore. I personally am a fan of cool simple guitar riffs. The songs are varied. Sometimes slowly pushing hard but most time fucking fast. I like the arrangement of the songs. This must be live killer in the pit!

The sound is absolutely perfect and really brutal. And the instruments are played accurately. To the point. They know what they do! Jesus Cröst is definitely the best mixture between Cephalotripsy and Yacopsae. And this is the problem. I don’t know why bands have vocals like Cephalotripsy. This gargle annoys me total. And that's what annoys me here. This gargle has no power, no voice, nothing. And that robs this album also force and annoying.

So my favorite songs are “Horst Hrubesch” and “Roberto Falcao”. These songs have everything a good song needs. And gargle was so used as it should be. Just as a brief effect. Because of the annoying gurgle only 4 Stars. 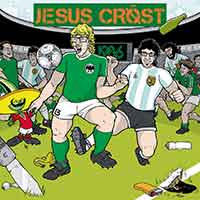