Jigsore Terror is a death metal band that plays the old school deth metal. bands they like to mention as influences are Death, Repulsion and Terrorizer. Nothing wrong with that. With the touch of grind in it you get 15 tracks that are played on high tempo. Brutal voices and dirty guitars with few leads. It is a heavy album with no room for experimentation and melody. The songs are sounding monotonous after a while. There could and should have been something exciting, thriling or unexpecting on it. 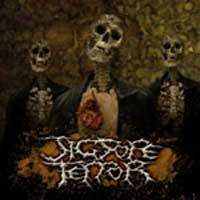