I seriously doubt that there's anyone here in the death metal genre, that has never come up with this band! Jungle Rot is a truly underground death metal band, breathing the reek since 1995 and still kicking serious ass! 2013 was time for their new 7th full length and this came under the title "Terror Regime". The first positive impression comes from the awesome cover, and of we go expecting nothing more than a bloody massacre! Once the play button is pushed, their old school death metal fills the room, and the horn of war is automatically sounded! Heavy sounding guitars, brutal vocals and super clean production binding them all together, creating a war atmosphere so much expected!

The whole duration is about 35 minutes and on the third play of this new atrocity from the old schoolers, there are two major assumptions going on! The first one is that Jungle Rot are experienced and awesome players, capable of creating a war atmosphere unmatched! No doubt about that. The second assumption is a bit bitter cos after three hearings, I still couldn't memorize a riff or two! It seems like the songs are so equal one to another, that you really cannot spot something really good from 35 minutes of music! Don't get me misunderstood! "Terror Regime" is a really good album. It has all the elements an old school death metal fan wants to hear and maybe more! If this was a band's first full length we would be talking about a really promising band, but this review is about the 7th full length from Jungle Rot, not any other band! It just can't keep up with the standards this band has created for so many years! Trying to focus on stuff that made me gaze this release as a total stranger, after spending time with it, I would have to say that there's a lack of interest on the riffs. On a macroscopic view (if I can use such a term), they all look alike a lot! They seem a bit hasty and a bit overpowered by the good production! And of course the production theme is another matter. It is crystal clear, but the bass seems to be swollen away behind the guitars, and the drums which really have a special spot in this new full length! I can't blame them of course. The drumwork is excellent! The drummer has a ton of various ideas and manages to keep the old school stuff Jungle Rot play, together and solid! But it appears that Jungle Rot had to cover behind a flashy production in order to shine, and I can't live with such a term when it comes to Jungle Rot.

I'll have to take you back to their first full length or even their previous works. A bass guitar capable of breaking necks and spines, and it really seems silenced here in this new full! Again though, I have to set things straight! "Terror Regime" is not a bad album. In fact it is not bad at all! It is a really nice aspect on how old school death metal is played nowadays from the veterans on the scene! A nice way to chill out with the buddies drinking beers and listening to what those beasts have to offer for 2013! It is just this bitter taste it leaves in its end, that something much heavier and less shiny was expected as a 7th one! Anyway, fuck me, these are just one man's thoughts on something you may find interesting after all! So purchase it and break your ears on their savagery fuckerzz. Old school death metal all the way! Can't beat that![embed]https://www.youtube.com/embed/cAEf33fN9LY[/embed] 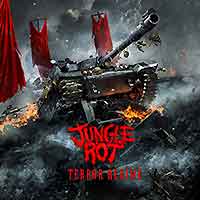