German d-beat death grind… compressed to hell but with a delivery that kicks out the cobwebs and shatters some skulls in the process. Kaapora have been something of a refreshing change for me lately. There is a distinct flavour of old Floridian death metal groove mixed with a European vocal complete with flourishes of blast beats and d-beats that really enhance their sound. ‘Existence and Sickness’ is much of the punkier and punchier side of the band, a bit more like Necrocurse without the satanic stuff, but then you come to something like the ‘Dogma’s Cage’ that is all together more crustier, it therefore sounds more dangerous! Some of the band members have played with Purgatory and two guys form part of the band Korades (Nico on guitar and Evandro on bass), you can really hear that influence and experience of these two great bands coming thorough here for ‘Distainer’.

For the more down to earth death metal influences, check out ‘Awakening the Dead’, fans of Morbid Angel, Death and latter Carcass will appreciate this. This is a pleasing mix of the d-beat monster and traditional death metal values. If you want a Swedish influence then try ‘Neuratheniker’, more groove and anger with a simple but very effective delivery.

Kaapora are simplistic in their style and there is a defiant middle finger to their delivery.  ‘Distainer’ is one of those releases you can play and feel comfortable, excited, angry, happy and sad all at the same time. Kaapora have a similar skill to fellow countrymen Depression and even a little General Surgery, their combined efforts of traditional bruising genres ensures that you are entertained through each and every one of the eleven tracks. 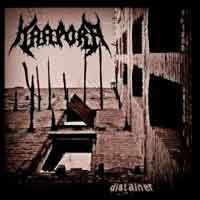