This Czech band arrived like a proverbial lightning bolt in my review pile this month, a total shot of rocket fuelled thrash adrenalin with this their third full length album a gap of six years since their second but only a couple since the triple split with Catastrofy and Exorcizphobia in 2016. The rather inauspicious intro piece, '1095 N.L.' that starts this album gives no indication as to the fury that is about to erupt when the title track ignites from the speakers. There is an urgency, a vitality that makes listening to it bring you out in a sweat because of its speed and insatiable riff rabidity. Each track switches velocity tangentially but superbly as the band takes its influence from the European style of thrashing thuggery with a sound that is savagely clear without having all the edges rounded off for the sake of precision, indeed the edges of this bands guitar work are razoring, knifing the listener with serrated viciousness.

'Thrash & Koks' begins with thrash’s trademark riff and cymbal smashing with shouted vocals lambasted in crossover style creating an angst ridden tune with a gang chanted chorus and contrasts hugely with the more melodic 'Skleněnej Hrob' which sees the pace taken down a notch and allows the bass playing to take focus. The drum definition on this album is excellent too as the riff break is awesome allowing the track to gather its forces ready for the speed injection and at times I was reminded of the speed of German acts like Deathrow, Assassin and Exumer during the 1980s. 'Tančíme S Démony' is nothing short of auditory annihilation with a stunning and devastatingly effective riff as the alternating vocals create an energised song with colossal impetus that sees the boot of its foot stamped firmly on your neck. I do like the vocal tone on the album it is clear, yet possesses a hostility you can feel in the enunciation of the lyrics and when the track switches tempo it is brilliant then injects a riff break which is also superb, the song is a highlight of the album for me personally.

I may have a focus on the speed of the songs this album has but 'Město Hříchů' offers something different, by slowing down initially momentarily giving you a false sense of security, well for about half a minute anyway before a scorching riff blazes in. I love the snare sound on this album, it has that ricocheting sound that Running Wild always went for being very dominant so you always know it is there so you can snap your head back and forth to it as the song has copious time changes. There are few thrash albums that really excite me these days but this has grabbed me completely for being genuinely authentic and who cares if bands wrote stuff like this 30 years ago, alongside current bands like Evil Invaders, Lost Society, Nervosa, Distillator, Extinction, Harlott, need I go on this Czech Republic band epitomise what thrash is about and make this an essential purchase for thrash fans the world over which will hopefully put them on the world thrash map as I hope to see them live in the near future. 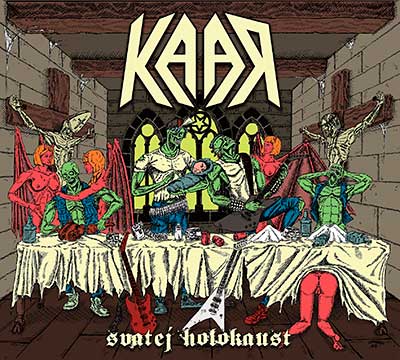