Kaine are a leading force in the British Metal Revival formed in 2009 by Rage Sadler (rhythm guitars & vocals) and Dan Mailer (bass guitar & vocals). The band is a NWOBHM inspired 5 piece which offers a tri-guitar attack. Kaine have played close to 200 shows and has supported some of the best known acts past and present such as NWOBHM legends Praying Mantis, Dennis Stratton (Iron Maiden), Deep Machine and American Thrash legends Mordred as well as current acts such as Savage Messiah, Absolva (ex-Fury UK) and ZP Theart’s I-AM-I (ex-Dragonforce). The band was voted the GMA Breakthrough U.K. band of the year in 2013. The results were Kaine (15%), The Defiled (14%), Fallen Fate (13%) and Wretched Soul (12%). Kaine completed two tours in 2014 the first alongside Monument (featuring ex-White Wizard members) and the second supporting Mordred on their 10 date reunion O2 Academy tour of Britain and Ireland. In 2014 the band released its second album “The Waystone”. The album was recorded at Angry Bee Studios in London and produced by Akis K (RIP 2015) and mastered by Z-Plane. The album sold out of the first pressing during the pre-order phase and the lead single “Iron Lady” has over 6k views on YouTube. The second pressing of the album subsequently sold out also!

The Kings of NWOBHM are back! With a new single entitled ‘Quality of Madness’ and quality it is for Sure? This single released with the new line-up consisting of (Davids/MacKinnon/Mailer/Murch/Sadler) a true force to be reckoned with. Recorded live at Short Stack Studios and produced/mastered by Jaz Powell. The powerful chugs that emanate from this single are nothing but pure metal in every sense of the word. It’s a creative melting pot of sturdy rhythmic slabs of genius! Instantly engaging and forthright it holds its own and turns hellacious within seconds of pressing the play button!

Kaine’s intent is pretty clear as they mesmerise through a hail of riffs that rips you a new one! It is a crisp display of sheer metal arrogance. Since the band’s first early self-titled E.P release, I have been proud to say I am hooked on their sheer thirst for proving a point. The rampant brawl of intense riffs and feisty beats are prevalent through-out and give the listener a knee jerk to the gut! The vocals by Rage are healthily gripping and sit perfectly over the jarring rhythmic swagger that simply bursts from its confines and punishes on all levels.

Kaine have come a long way since forming in 2009 and have over the last few years grown in stature and now producing excellent quality material that is ripe for metal ears. From being intense from the off Kaine are a band that are never likely to let the grass grow under their feet, if something can be obtained it will be and done with exacting precision which makes Kaine a league above the rest.

This single at 6 minutes and 30 seconds is a riveting composition that has bags of allure and appeal and will have your hair flying in seconds of hearing it.  The fact they have added another guitar and become this tri-guitar attack has certainly pumped yet more adrenalin into an already ‘fit to burst’ volatile mix!

Kaine are now well on the road to becoming the next Iron Maiden but much, much better (in my opinion). These guys deliver the goods and are no nonsense in approach! Great in a studio setting but far more grandiose in a live one!

This is a superb single that deserves attention - If you want to do something good this year then add this to your CD collection!! 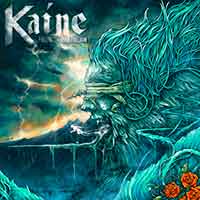