This is the 2nd album from five piece Kaiserreich. 'Ravencrowned' is fast, aggressive black metal in the vein of earlier Dark Funeral; not much room for melody. Harsh and gritty sound with lots of tremolo picking and speed on tracks like "Veleno." Drums tend to sound a bit one sided as they just beat the same notes with the vocals sounding almost painful with the shrieking; helps enhance the evil effects of the music but at the same time makes it difficult to listen to. So many vocalists out there use the exact same technique it tends to made Kaiserreich more obscured than standing out in a long line of black metal artists. At least the variation in language throughout the songs give the band an edge to make people curious about what they are snarling about as opposed to being direct with the usual Satanic title tracks that may turn away those who are sick of the theme.

Tracks like "Cuore Nero" have a bit more groove and melody, slowing things down to a mid pace rather than just blasting right through in a harsh, aggressive style that may become too overwhelming for some listeners. "Tempest" is a grand epic that tries to balance the harsh speed with melody, and the extreme pace will be far from boring for anyone, but at the same time those not used to extreme black metal may find it more of a headache than it is worth. Overall the album will probably suit those who are fans of 'old school black metal,' but at the same time those who are well versed in the genre will probably find Kaiserreich too generic to really stand out in their collection amongst other artists who took a more experimental or genre defying route to make themselves noticed... even if it pissed people off. 'Ravencrowned' stands off as a worthy spin for those who like the whole corpsepainted, sharp and violent atmosphere of the music but that's about all it will do for them. 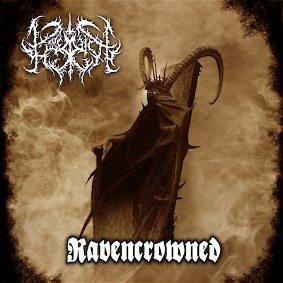