This is the German band who play melodic death metal. From the opening notes you can hear the usual suspects in terms of influences, it gets all of the tried and tested notes and arrangements out of the way in the early part of the release, then towards the latter part increases the quality immensely as far as I am concerned with much more inclusive song arrangements, not so complex, this works in the albums favour.

The early part of the release I kind of find my feet with this band, I can’t help thinking of more recent Arch Enemy and consistently a lot of Dark Tranquility. Having not heard Kali Yuga’s earlier two full length releases I cannot compare any development, but taking on face value, it’s very much in line with the whole sub-genre. When ‘Immortal Fire’ plays out, I now get a sense of inspiration, previously Its been business as usual, but for this track Kali Yuga sound a touch more melodic with a cool guitar tine and streamline the arrangement a lot more. Essentially, it’s an easier path to follow. Earlier on the album there are some references to low end British death metal, the phrasing and feel of ‘The Gray Man’ has a cool Benediction feel with plenty of nods to the Swedish warriors Amon Amarth. The switch into higher gear in the latter stages of the releases find this album much more effective at conveying its message and some of the riffs are indeed magical.

Whilst this album is never going to set the band ahead of any of their contemporaries, there is a nice mix of European melodic death metal and a few passages of the more brutal stuff. For a seasoned band, the production and arrangements are solid, as is their place within this sub-genre. An enjoyable release but it could get lost in the mire of similar bands, which in fact would be criminal based on their musical ability that is on show here. 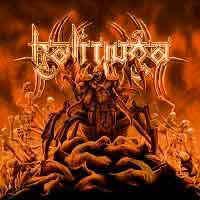