Kali Yuga - Slaves To The Subliminal

Never mind that Kali-Yuga is the god(dess) of the apocalypse and destruction; the band's debut after their successful EP back in 2009- 'Slaves To The Subliminal'- sounds like the soundtrack to the end of the world. The sound merges the deep growls and aggression of death metal and the catchy guitar rhythms of thrash music for an enjoyable output of metal. It might take some time for the album to take off though since most of the tracks tend to start out the same, such as "Fields Of War" and "Suicide." Rather than lead in a charge, Kali-Yuga just obliterates right from the start, hammering out riff after riff, but thankfully with some enjoyable orchestration as opposed to putting everything into overdrive without much thought to placement, like some death metal bands do to be too extreme. It is more than unlikely that fans will find the music boring- even if it tends to follow the same formula- since the group does their best to mix chugs with faster, intricate guitar solos. "Suicide" is a perfect example of this since it features a pounding war march along with some great melodic bits that carry on to the end. Sometimes it even feels like there is some Amon Amarth influence in there, only heavier. Other tracks like "Deadline" show no compromise and just hit hard like a decent death metal track would without much room for melody at all.

It is the last two tracks that will most likely bring attention to themselves. All of a sudden when "Sanctimonious" hits it feels like the band suddenly changed direction. The soft, singular guitar approach that leads into the heavier, seamless, slower passages of guitar wall really brings to mind the melodic death metal influences. As the album progresses on that one guitar from the beginning can still be heard, eastern tinged, as it leads the way, making this by far one of the more memorable tracks overall from the album. "Slaves To The Subliminal" is similar, but goes for more of a slower/ mid-paced all around track, tying everything together- from the fast thrash parts to the ugly death metal bits to the melodic death parts scattered throughout all the tracks. As a result, it is a satisfying closer. Ironically, it leaves listeners with a satsified sense of hope for the band to be more than just 'another death/thrash band,' which is ironic for an apocalypse group. However, those who are attached to the likes of God Dethroned (RIP) or Blackguard will probably find this side of the end of the world very satisfying. 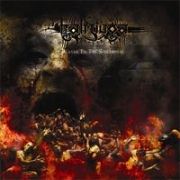