Kali Yuga (in Hinduism this is referred as the "Dark Age") are one promising melodic death metal band from Gera, Germany. "Wrath Of Durga" is their second full-length offering after the debut "Slaves To The Subliminal" from 2011. If you enjoy melodic but heavy riffs, double guitar soloing and some breakdowns here and there then you should give an ear to Kali Yuga. Because they know how to write melodic stuff.

After the short piano intro called 'Dawn', the first real track "Desecration" attacks your ears with guitars that will remind you of Amon Amarth and the old sounding of In Flames. Hypocrisy and Dark Tranquility have also been an inspiration for the guys in Kali Yuga as it is evident on the following songs 'Oblivion' and 'Odium'. The band is capable of writing slow songs like 'Scene Of A Murderer' and 'The Agony' while 'The Black Wall' starts with 100% black metal riffing and galloping drums.

Good words must be said to the two guitarists Eik Halle and Michael Albert - they deliver awesome riffs and leads and can play equally well melodic death metal, black metal or some modern US-style of heavy music. Grutzer's vocals are raw growls but you can hear what is he actually singing. The production of "Wrath Of Durga" is on a very good level and I have no complaints in this direction. If melodic death metal is your thing then give this album a listen! 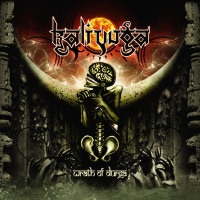