Indonesian death metal often punches hard, but for some major interest here we're gonna need a shovel. As Kaligula's second record and 2020 release, "Doctrination Of Atisamdha" sadly doesn't have the desired pull for attention as others from their scene. And whilst there's nothing specifically wrong with the album in general, there's also very little to boast about. The mid album - mostly instrumental offering of 'Ati Samdha', indeed yields as the band's most finest creation, granting snippets of diversity that only leave an itch for more in this department.

Following similar formats among each track leaves little to digest for the listener, as they're engulfed in a rotation of boredom and lack of diverse interest. Even vocally the album disappoints with one constant vocal pattern prominent throughout. Sometimes contributing guitar solos worthy of a D-grade Nile - these are the moments on tracks like 'Doktrin Disorientasi' that offer some glimpse of hope for future Kaligula material. It pains to admit that the most swaggering aspect overall here is the band's monolithic album art, but sadly it isn't enough to offer any extra credentials to Kaligula's entire summation. Perhaps album number three will be Kaligula's saving grace in redemption to 2020's oddly titled, mess of a record. 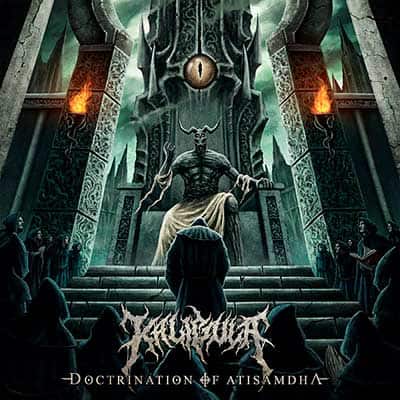