Kampfar is by far one of the best black metal bands to ever come out. Their entire discography is amazing. It would be awesome to see them do a split with Deathspell Omega or Austere. Kampfar hails from the motherland of black metal… Norway. They’ve just recently released their seventh full length release which they won a Spellman for their album Profan in the category for Metal, which is a Norwegian Grammy. They were up against Enslaved and Tjsunder as well. If you haven’t heard Kampfar yet… the time is now.

I love how they open the record with a shallow gut wrenching cry that sounds completely miserable. Almost like Golem from Lord of the Rings. Although if you go back through their discography they have a handful of releases that start off with that dismal scream. “Gloria Ablaze”, seems like a progression with their overall cadence. The use of the yelling vocals adds another dimension of tone as well. The guitars are more melodic yet still retain that raw aspect. The tracks, “Profanum and Tornekratt”, are sweet rock influenced black metal songs that remind me of Dissection – Reinkaos and the more recent releases from Khold. “Icons”, is driving and filled with smooth transitions. “Daimon”, I love the movement of the first guitar section mixed with the chant/singing vocals. This reminds me of Reverence. The combination here creates a quite soothingly wretched fluidity to it. Amazing song writing throughout the entire album. They encompass the whole record within this one song. It’s extremely challenging to switch up the flow of the music while keeping the transitions seamless. Vocals aren’t too high pitched and his voice has just the perfect amount of rasp. So his vocals are still raw but are much more articulated because he’s focused more on the pronunciation than the screaming. But genuine vocalist, focus on the lyrics and the delivery. Kamfar has successfully added more melody and groove to their sound while continuing to write gritty black metal. The drummer doesn’t over use the blast beat. This is always refreshing in the realm of black metal. It’s also a nice piece of déjà vu with the Castevet album, Mounds of Ash. “Pole in the Ground”, is a wonderful straight forward, blast your face off track. The great part of this track is the title. I also think every time I ride the Metro Train I’m going to think of this song as I sit and stare at the metal pole in the ground. There wouldn’t be a more fitting title for the most straight forward song on a unique record. Oh but wait there’s more. The first half of the song is simplistic and more traditional than the rest of the album. Although the second half of, “Pole in the Ground”, has one of the greatest outros ever to a song. The lead melody is interesting and unique. They provoke an array of emotions within the atmosphere created here. It is impossible to put this into words. Just listen to this track and let it engulf you. With that all being said Kampfar is simply amazing.

Their discography excites me as much as Deathspell Omega’s. It’s so wonderful to listen to a band continue to progress and grow their sound without deterring from their original roots. This band is another great example of why it’s better to focus on writing and recording before worrying about playing live. Also the fact that there was a seven year break from 1999 – 2006 and Dolk is still able to get back on the horse and continue to pump out great tracks, is awesome and amazing. So after you let Profan engulf you, go back through the rest of their discography and find more gems from their past. 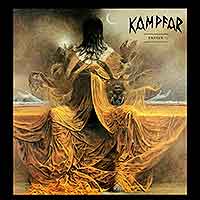