Karcinoma - The Night... Apogee Of Madness

The story of Karcinoma is going back to 1994 when three classmates started a band. Their first demo appeared in 1995 and two years later they recorded their full length with 5 tracks. That was in 1997 and now in 2007 Stygian Crypt is re-releasing this piece of black death metal with symphonic touches. The last track is remix of the opening track without the little intro. The band would play gothic power these days but glad they didn't do that on this album. Karcinoma plays heavy and blasting black death metal with symphonic and melodic touches. It can be harsh but also gentle in the mid paced passages. The songs are long running but offer different moods, symphonic atmosphere and bit of classical edges that it is very enjoyable. Track 3 is entirely sung by the female background vocalist and a resting point in the album. Surprisengly a nice album considering it is almost 10 years old and unknown to a lot of people. Shame as it is nice to hear and thanks to Stygian Crypt for releasing. 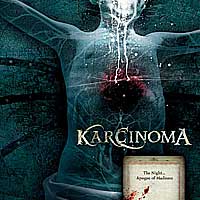