From the north of Spain comes this split “Alliance For Death Domination” by Karonte and Bloody Brotherhood released in vinyl on three labels: Dead Sheep Prod., Base Rec. Prod. and Hecatombe Rec. Both bands play old school death metal, in the way of bands like Entombed, Dismember, Carcass, Deicide, Malevolent Creation… and many, you can see a lot of influences within old school.

Karonte is a veteran band from Cantabria, active since 1994, with two albums released ("Letargo" and "Paraiso Sin Fe") and some demos and EPs, and all with Spanish lyrics.

Bloody Brotherhood is not so veteran (2011), but whose members have played in other bands before this one, with an album in 2015 ("Ritual Of Blood").

'No Hay Vida Sin Dolor', it begins with a thrash metal riff and style, a Swedish vein too, in the part of voice a heavy and obscure riffs, a good solo like previous.

'Dominación' it reminds Kataklysm, Malevolent Creation a slow and deep riff, and of course a very good melodic solo, this is maybe my fave song of this three first songs. These have been the Karonte's part.

The Bloody brotherhood part begins with 'In Tyrant's Land', a fast and heavy death metal, here we can hear blast beats, heavy riffs and some technics, with some parts similar to Deicide, and also Malevolent Creation, a very good final and the obscure style of this basque band.

'Thousand Years Of Lies', it reminds Pestilence, and with the add of keyboards to get a dark atmosphere, torn voice, I like it, after that we hear a fast part in the vein of Deicide, some clean voices, the constant riff of the beginning and also some technical parts.

Well, a good sample of Death metal, and you can know more of these bands searching for previous works. 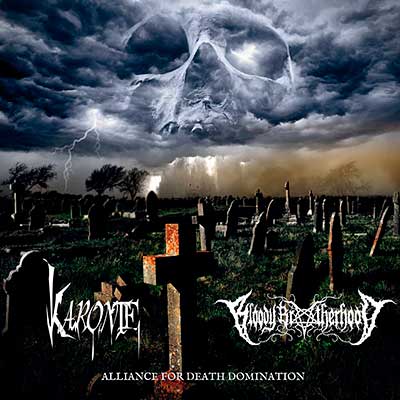