How's your Spanish? Not so good?? Maaaalo... Eso es muuuy malo senores y senoras! Karonte is a melodic death metal band coming straight from Spain and they choose to speak their piece of tale in their mother language! And why shouldn't they? When it comes to brutal vocals, any language sounds awesome so if they express themselves better through Spanish, they got me on their side! The truth is that this is my first encounter with those guys and it is a bit of surprise as they exist since 1995! A really old band that must has breathed and lived underground for so long! Since 1995 they have released 3 demos an EP and two full lengths. One in 2006 and this second full length in 2012!

"Paraiso Sin Fe" is their second full length and release for 2012 and it's wave length is based mainly in mid tempo groovy and melodic death metal! Those guys are really hard to keep track. Truly underground band that has a high level in whatever they do, and this high level couldn't be missing from their latest work! Catchy and groovy guitar themes which I believe is the main compass on how they construct their musical path. All based on groove and melody. No hyper blasting here. Their riffs are often enriched by beautiful and technical solos and lead themes that give a tone of melody in the mainly death metal atmosphere! "Paraiso Sin Fe" which if I am not wrong means "Paradise without faith" is an album that one can not hate! It is relaxing although it is under the death metal border! Brutal vocals, heavy guitars, steady and fat bass and a solid drummer that ties all this together in groove, create an atmosphere pleasant and really ear friendly! The truth is that you won't find a new way to approach death metal with this one. Nor will you find the masterpiece of the last 10 years in death metal. The sure thing is that if you push repeat in your player, you will find yourself not being able to understand how the last 4 hours passed without noticing as this beauty is looping on and on! And I think this kind of directness is what I personally search among other elements when I listen to a record in general. Yes technique, speed, brutality and precision are factors in a record that can easily draw attention and rate or underrate a release. But when you simply get lost in a band's music and hardly realize how a 40-45 minute record ended… then I think this band succeeded in the biggest element a record should have and that is the integrity and the direct playing and song composing!

Karonte are fully into that shit bros, the music that you will hear is the death metal they would listen themselves and is their true vision on how death metal should be played! And you know what? It is not bad at all. Their whole greatness lies in the simplicity of their riffing section and of course of the other instruments that follow but also on the brilliant way they joined melody to a genre that most think is meant to be brutal. Some may change their view on that after they listen to "Paraiso Sin Fe', are you willing to? Just give em a shot!! Can't dislike this one! 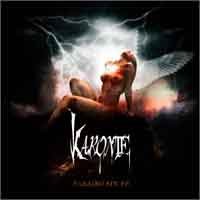