Katafalk's mini-album "Death's Contradiction" follows up 2003's "Storm Of The Horde" which was very well received. These four songs are a hellfire glory ride at blinding speed, complete with blazing leads, blasting drums and bileful vocals. Taking no prisoners, this album blitzkriegs right over you! To say that "Death's Contradiction" is high energy is a dramatic understatement, instant adrenaline rush is more like it.

Recorded with the same producer as bands Obscenity and God Dethroned, this release has elements of thrash, black and death metal in it. The hard-charging venom of vocalist Wokkel combined with dramatic tremolos of guitarists Niels and christiaan come at you fast and furious, and are made more pallatable by the occasional melodic guitar lead. The many cymbal crashes and spot-on drum fills compliment a solid bottom end. Too bad that after three years they are only four songs to show for it, and too bad that T.V. commercials and side projects have distracted the musicians away from writing more kick-ass thrash music. Fans of Katafalk are definitely going to want more of the same. 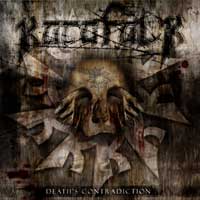