The Russian slam machine is back and their return couldn't mean anything less than: Hanged Corpses, ripped torsos, eyeballs on the ground and in general, a place of a massacre unseen and more horrid than ever! A slaughter of man unheard ladies and gentlemen. Unheard and unmatched! The brutality that reeks from the speakers can hardly be found in a brutal death metal album. When for some, evolution would mean, less brutality in order for technique and atmosphere to take place, those fuckers here understand only one thing to the term! Drums more wild and blast-ish than what they used to play, guitar riffs swirling and itchy, causing the ear canal to shake and bleed more than it did with their previous one, vocals that would make lots of death metal singers cry and a bass guitar that can only be combined to the caterpillars of a ten ton war machine spreading demise! The production is the final nail to the coffin! Takes the barbarity and wrath of the instruments alone and turns it into a nightmare unspoken! Clear and muddy as very little releases are! Everything here has its special place and has a role and the production of this pit of puke just makes sure, this is clear! The whole mastering and mixing would be a learning course for new comers on death metal production, on how a band can be heard the right way to create images worse than, getting eaten by wild dogs!

If you think all the above are graphic and imaginative, just purchase and listen to "Autopsychosis". It will totally blow the brains out of your scull ladies! The main difference with their first full, is that this one has a little bit less slam elements than the one of 2007. But this is only adds to the whole outcome, as it makes this one more interesting and literally takes you with it! Besides the awesome production, there's also a great riffing and song construction labor achieved! The duration of the songs has a variety from 2:02 to 5:03 minutes but I would say that their new songs are in an average of 4 minutes. Long enough for your speakers to get ruined! The whole song construction matter is kept at a low complexity! No super filled songs and no awkward impression grabbing songs! This is all about the brutality of the whole thing! Great riffs easy to memorize, and not more than three or four riff variations in a song, making the songs more direct and more catchy than ever! After the second hearing they just can't get out of your mind swirling around like sharks around their victim in open sea! Am I being graphic again? Not at all lads. Just grab a bite from this platter of gore and you will possibly think that these lines here are just unable to describe the horror unfolding before your eyes once you push the play button! Russian brutal death metal scene at its finest people. Can't beat that! 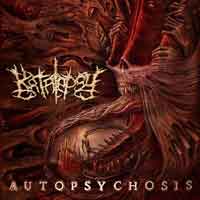