This second album from Moscow brutal death metallers Katalepsy is a solid slice of technical battery. From a nice introduction track which is actually played rather than a load of wishy washy crap put together by the producer. The album kicks in with 'Blinded Sultan' which takes no time in letting the listener know its intentions. This is 40 minutes of odd time signatures, technical extremities and some fantastic musicianship. I mean this is fucking tight!

I did get slightly worried during 'Blinded Sultan' and 'To The Lords Of Nihil' because about midway they pause and go into a beat down and we get a little bit into “deathcore” territory (and I fucking hate deathcore!) however 'To The Lords Of Nihil' redeems itself with an amazing solo and for the rest of the album there’s not a hint of the D word so we’ll let that slide.

That small qualm aside Katalepsy deliver some riffs, solo’s and drum patterns Suffocation would be proud to have their album. It has the clinically clean production and precision of Decapitated and Vader.

"Gravenous Hour" is a prime example of death metal in 2016 is alive, healthy and more powerful than ever. 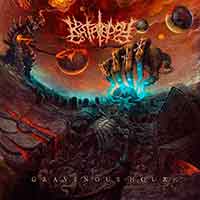