The opening lines, not sung, on the Musick Brings Injuries CD by Russian band Katalepsy are: “Cannibalism doesn’t exist. It never existed.” The track is called “Gialo” and opens the CD with chewing and grinding sounds so fit to the throaty death grind. I say this because the vocals are so tight and so much like a vibrating ripsaw against the heavy crunching guitars that it is almost as if the band really is chomping down on this life and tearing it to shreds. Especially if we keep in mind that the title of the CD, Musick Brings Injuries, does two powerful acts with its title alone. First, “music” is spelled “m-u-s-i-c-k” which simultaneously makes me think of disease (sick), magick (a spell so powerful that the world will burn eventually at someone’s hand), and with the added “k” just looks stronger, jabbier (diction creation), more violent. Second, as Musick is the bringer of Injuries, it is also the bringer of pain.

The pain is everywhere in fact. Not just in the flesh-tearing vocals, but the added audio clips all through the album add not just texture to the CD’s mix, these added clips bring up eating people, skin, and body parts. I guess it all comes down to chewing. The band breaks from tracks like “Gialo” to “Rots of Fuck” to “Rabid” with a constant act of creative pulverization. Bring the pain! 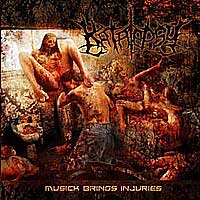