Hellish, evil toned, old school 1990's Hellenic sounding black metal from Greece. Katavasia bring together an epicness which spirals within the cosmos, creating a very unique darkness in their sound. "Sacrilegious Testament" is this band's debut full length album and with it they certainly rise above and rip apart anything which stands in their range.

Tracks such as the 5th song titled 'Visions Of The Misty Night' rapture the senses bringing up a fire storm with dancing riffs and demonic bliss.

I love the punch of the mid tempo throughout the entire album and it's catchy melodies. There is a constant forge forward of speed here which even still treads on through tracks such as the 7th 'Mater Tenebrarum' which lend a smooth break in the transition over to the next track titled 'Virgin Blood' which simply just brings up the feeling of sacrifice - seriously when listening to it I got the image of a 1970's - early 80's underground horror movie scene of blood and human sacrifice haha… really great work here.

The vocals are gut ripping, puking out demonic acid into the void of black-love it! Growls, grunts, screetchy whispers and the beauty of it is that you can still make out the lyrics - the entire episode is simply bone chilling.

I love how Katavasia with "Sacrilegious Testament" touch on an almost gothic sound without overlapping into a gothic sound, keeping this album purely black. "Sacrilegious Testament" summons up spirits and lends a nostalgic feel to the atmosphere of this album. Top notch production but not over produced and well mixed blending in a nice lacing of keyboards which to not take over these tracks. I highly recommend giving this a listen and btw-almost forgot to mention that this album features Sakis of Rotting Christ and Sotiris of Septic Flesh as guests so well guess this gives you a little hint of what caliber this album hits-it's pure. Please take note of the cover art as well -really classic. 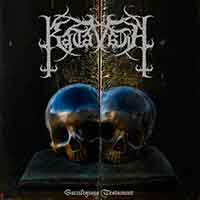