This is the debut album from Californian blacksters, Killgasm and after a whole lot of splits, demos and EPs, this album has been much awaited. Its worth mentioning that those who don't follow the movements of black metal that these guys are not what people would refer to as "true" as in the sounds of the Norwegian stuff i.e. Mayhem, Arcturus and Burzum. These guys take elements of those bands and I suppose combine them with more so death metal tones. Also, these guys don't really embrace the productions much associated with black metal i.e. very lo-fi recordings. Me, personally would call them shit recordings, others call them evil. Haha whatever… The production with these guys is actually really good were most instrumentation can be heard with the utmost clarity. There's alot of grind in the mix with these guys. I'm not entirely sold on weather it works or not but there you have it, blackened grind. And another sub genre is born.

When I hear this album, I hear alot of influences but I definitely can hear an Absu thing going on (also American) particularly in the drumming. This guy is gifted behind the kit and here on this recording his talents can be heard. I think what these guys is tried to get every band members influence and put it all in the mix. It would be unfair to say that its only black metal and grind in the mix. I hear things like Hail Of Bullets in the writings and I read somewhere there that these guys were like a more updated and slightly more perverse version of Conqueror and with that in mind, the title of the album is a twist of their album "Hellstorm Of Evil Vengence" so perhaps abit of fan worship there? Vocally, these guys sound total death metal and not screeched black metal vocals (there are a few though) which makes me happy as generally I'm not a fan of black metal and can count on one hand the amount of black metal bands I like. The guitars, whilst quite high and use obscure chords like black metal bands are more so heavier and sound way more grandiose than so.

All the tracks are quite catchy and quite tuneful. The all have great hooks which keep the track stuck in your head for a little bit which can only be a good thing. Its definitely not what I expected but a most enjoyable listen. 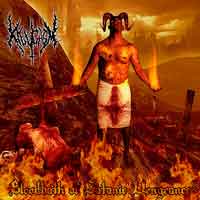