Polish death metallers Kingdom return with another half hour offering of abrasive down and dirty death metal which is so grim it feels like the band buried the album for a year and dug it up again before releasing it!

For the uninitiated Kingdom play a pitch black, dark and extreme version of death metal. Think Morbid Angel, Acheron, Angelcorpse and Incantation all at their earliest stages before any of them had access to expensive studios and you get the idea. It’s all ridiculously catchy backed by thundering drums and topped off with blistering solos. There’s little atmospheric pauses to be found on tracks like 'Grobowiec Ludzkoyci' but they are few and very brief.

In all fairness “Putrescent Remains Of The Dead Ground” is business as usual for the band. They go straight for the throat gut you and get out before you even know you’re bleeding. There’s an Immortal cover at the end and finishing with a cover seems to be a tradition for them. If you subtract the cover you have a total of 25 minutes of new music. So you get the idea, this is a fast brutal attack with no song exceeding 5 minutes.

In short this is a brief short sharp burst of dark and relentless Death Metal and is a great addition to the bands steadily growing catalogue which will please long term fans and newcomers alike. If you are new to the band also, this is as good a place to start with them as any. 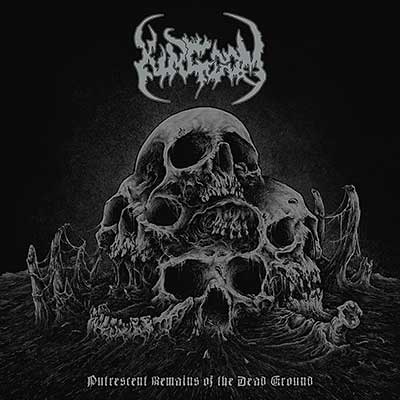