Kingdom – Sepulchral Psalms From The Abyss Of Torment

Poland’s Kingdom reaches the crucial third album mark. The third album is crucial because it either establishes a band to cement a long career or it will be their last. (I’m aware I am painting with broad strokes but generally that’s how it works). This is the first album I’ve heard from the band so I have no reference to their past releases so here we go.

Kingdom plays a dark and dirty take on death metal, with the darkness and atmosphere of Incantation and ferocity of Angel Corpse. The slow number 'Abyss Of Torment' revolves around a bass line and slow rhythm section that keeps kicking in and backing off before kicking in again while the track builds up. Like a beast that circles its prey taking swipes and attacks wearing you down slowly. 'Monolith Of Death' this is a 2 minutes attack, this is where the speed and the blastbeats come to the forefront. This is much more traditional death metal. 'Forsaken Tribe' kicks in with an infectious groove and a catchy riff demanding a head bang from the listener. 'Black Rain Upon The Mountain Of Doom' is just punishing and has an awesome solo Kerry King himself would be proud of! There’s a pretty decent rendition of Darkthrone’s 'Cromlech' which brings the album to a close.

All in all this is a relatively short but sweet attack on the senses. A strong and enjoyable slice of death metal. It chops and changes pace and keeps itself interesting throughout the album and it has this authentic grim atmosphere it’s a great soundtrack to the upcoming winter. 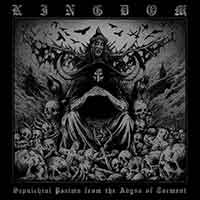