Kna'an are a melodic death metal band out of Israel who profess religious callings in their music, but it isn't out to slander or beat it down with brutal melodies. Instead, the group focuses more on the Christian and Jewish literature around the Bible without being so black and white about the situation. While some bands blatantly title their tracks what they intend to convey, Kna'an do a better job of being a bit more open and free spirited in the way of interpretations. Sure there's some recognizable religious tracks such as "Gensis" or "The End Of Purity" that reflect the whole Adam and Eve story, but for most people the rest of the songs don't seem as preachy. And music that's good and isn't preachy is even better.

Kna'an take a bit of a progressive route with their debut album, especially with the guitar. The opening track is entirely instrumental and features a lot of Spanish acoustic guitar melodies that are really a step up from the usual wild solos or over use of keyboard that many melodic death metal bands use. The vocals are about the only thing that is really 'standard melodic death metal'- snarls mixed with growls that are more mid range than any extreme lows or highs. Many tracks make use of putting the synth and guitars together for very quiet, interesting moments such as on "Scarred Forever" which features plenty of heavy riffs and melodic brutality before settling off into a more relaxed phase. "Sulfur Salvation" features some great mid-song harsh and backing clean vocals with the keyboards, and "Walk To The Mountains" is an excellent acoustic piece that features all clean vocals with very little hint of brutality, but fits the blend of harsh and beautiful tones of the album altogether.

With such complex structures of each song perhaps the best thing that Kna'an can do as a melodic death metal band is not create the same song twice. Certain musical formulas may be awesome and catchy but if they're played over and over they can become dull. Kna'an make sure to never have the same melodies in the same place and always create a great balance of edgy melodic death with more classical and progressive styles. While some of the tracks on First Impressions are the same on some of the band's earlier demos, they are better versions due to upgraded production. Kna'an hopefully will be around for a long time and keep making the awesome melodic death that they do.  For fans of similar melodic death metal styles such as In Flames, Amon Amarth, and Graveworm. 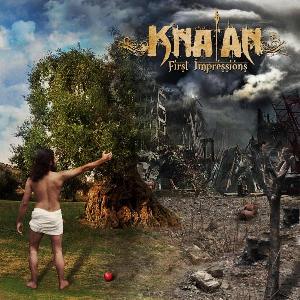