After their previous album in 2004, Norwegian Koldbrann strikes back with a 11 dark opus called Moribund. Songs that clock together for about 60 minutes of grim black metal. Long instrumental passages with riffs that frequently change. Also tempo of the songs go from dwelling mid parts to piercing faster parts. This black metal is more complex than the average "true" black metal band with a lot of tension in their tunes. The structures are well thought and suits the songs very well. With a cleaner sound this album of Kolbrann step out the masses and indulge you in the freezing cold nights. 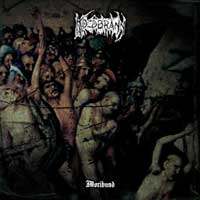