Kongh - Shadows Of The Shapeless

Shadows Of The Shapeless is the second album from Kongh after a demo released two years after they started in 2004, their debut Counting Heartbeats from 2007 and a split-LP with Ocean Chief one year later where they unleashed a twenty-four minute crusher. This shows the band has some giant steps forward as this album is far superior to anything they have previously recorded. The band blends different styles from doom, sludge, post metal, psychedelia, hard rock to ambient to create something that is truly their own sound. The influences are varied but you can hear traces of Electric Wizard, Toadliquor, Neurosis, Melvins, Burning Witch, Katatonia, High On Fire, Motorhead, Minsk and of course Black Sabbath. Not wasting any time in destroying your eardrums, the opening track "Unholy Water" is a 11 minute downtuned doom burner that builds from start to finish with aggressive parts mixing in well with almost unexpected melody lines courtesy of the vocals. With this band its all about atmosphere and "Unholy Water" takes you to a cold and barren landscape. There is a chilling guitar solo at about the halfway point into the song before you are bombarded by more heavy riffing in the vein of High On Fire. "Unholy Water" is one of those classic moments in sludge and doom that leaves you already so satisfied musically that listening to the rest of the album almost seems unnecessary. Next track up is the Sabbath inspired riffing of "Essence Asunder", here guitarist David Johansson sets up a clean but brutally heavy groove that is complimented by some bluesy breaks. This track has it all within its 15 or so minutes from some thick bass sounds, screaming vocal parts to some bizarre off-key guitar noise sections that could be coming from Rwake or Neurosis. After this track, a little rest is needed and you kind of get with the next track "Tank Pa Doden". Its short and melodic and is a perfect interlude to this intense album. Next up is "Voice of the Below" which reins in all the styles already heard on the album and condenses them into one sonic piece of music. The track that sounds like a bastard child created by mixing Yob and High On Fire together is pure power. Taking the very best essence of doom and throwing a hint of the finest black metal, the track is full of sweet Sabbath styled melody lines also making this one hell of a colorful piece of music. This rates as the best track along with "Unholy Water". The album ends with a 16 minute monster "Shadows of the Shapeless" which features more melodic guitar work mixed in with blackened doom and the result is nothing short of magical. There is times when you think of the apocalyptic sludge of Burning Witch and other times where bands like Agalloch come to mind, so varied is their approach and they deserve some huge praise in making this all work so well. Vocals range from black metal rasping to howling but you haven't anything till you get the ending of the song which is a crescendo to kill for. The song is a staggering piece of work and is solid proof that doom can indeed be innovative. The uncompromising approach boosted by the powerful production makes this another essential release for 2010 even though it was released last year but near enough. "Shadows Of The Shapeless" has enough experimentation but also enough straight up doom sections to please a wide variety of listeners so there is no reason why this cant appeal to a lot of people out there. I had mixed feelings about Kongh but now all that has changed, this is a tantalizing, exciting album and the excellent artwork just enhances the whole experience of listening to this masterpiece. Who knows how the band will follow this because this is pure gold, if you like extreme sludge and doom with plenty of un-expected twists and turns, buy this. 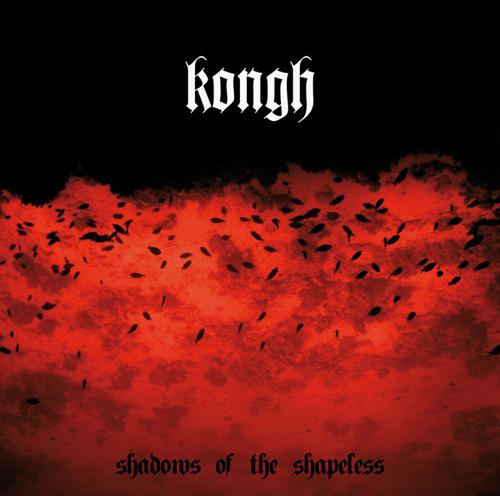 1. Unholy Water
2. Essence Asunder
3. Tänk På Döden
4. Voice Of The Below
5. Shadows Of The Shapeless