Formed from the remnants of Hibernus Mortis Florida death metallers Koroidia have been doing the rounds on the US death metal scene. I really enjoyed their last EP “Wrath Abomination”. I loved the slow introduction on 'The Gorgon' and the way they used samples from the classic 'Clash Of The Titans' movie, especially the sound of Medusa’s tail was incorporated into the opening section. 'As Vultures Descend' was an awesome track.

The band have that classic Florida death metal sounds, taking cues from the usual influences Death, Morbid Angel etc but Koroidia were a little darker. There was a bit of Incantation and Immolation in the mix. A slight more of a blackened influence and that element is a lot more prominent on this their second EP “Apparitions”. This time we’ve got three tracks coming in at just under 15 minutes. It’s a short, brutal burst. A death metal espresso if you will!

Starting off in true metal fashion, with the sound of lightning and a drum roll before kicking into 'Storms Of Eradication'. It has everything you want, great riffs, pummeling drums and deep Kraken summoning vocals, above all great, well crafted memorable songs.

The only real problem is that things finish just as you’re getting warmed up so let’s hope a full length comes out soon. I’d really like to see this band really flex their muscles and explore their sound on with a whole album. If you’re into Morbid Angel, Incantation, Monstrosity and the like then look no further. 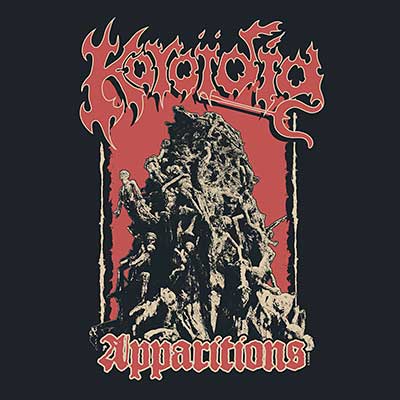