Kosmophobia unleash their debut demo, 'Kosmophobia,' from Switzerland and despite its brief length, provides plenty of progressive and technical entertainment. The base is death metal along the lines of a ground like Obscura, but the music and production is quite well done. After a short intro, the band launches into "Aeons Conspiracy" which is full thick, chugging riffs and obliterating drumming while backed by eerie and spacey keyboards for a symphonic edge. The technical part comes from all the solo guitar work that every so often interjects itself into the music, and when the solos hit they sound pretty good, like melodic death metal styled. The drums are pretty standard beatings but vary up every once in a while to keep up with the dynamics of the music. Tracks like "Etemenanki" features more of an industrial style to the keyboards, but the guitars are still pretty technical, even if they have that 'standard chug' to them a lot more than the other tracks. It's very jazzy, almost like Cynic, but not quite at that level. "Eye Of The Twin" has a bit of vocal change; they seem deeper and louder, which is actually very effective and enjoyable because on other tracks they feel almost more faded and generic. Here they have more of a presence among the rest of the instruments. The keyboards are also more present and still adding that prog/ spacey effect.

This is a great start for the band and for a self released demo, the quality is excellent. Musically the style isn't anything new, but Kosmophobia step a little outside the generic technical death metal zone by throwing in the keyboards rather than focusing on just guitar solos. There isn't anything epic yet- most tracks barely clock past five minutes- but then again this is just the beginning... 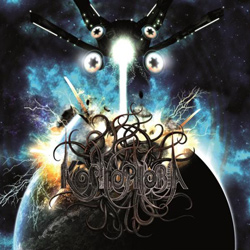