Krass-T is a Thrash / Death Metal band hailing from France. From Valenciennes to be precise. “Le Jour De Saigneur” is the bands very first release, which is in fact a self-financed DIY album with a total playing time of 39 minutes. The sound quality is adequate, but don´t get me wrong. This is not a shitty sounding garage recording. “Le Jour Du Saigneur” breathes the filth and the spirit of the underground and is a credible release of four French guys sharing the same musical vision. So far so good. But when you take a closer look at the songs, it seems like a few parts aren´t completely thought-out. Oh, these guys know how to handle their instruments, but they should concentrate on their Thrash / Death Metal concept instead of adding Hardcore and Metalcore ingredients to their style. This ruins some of the real good ideas on this album. Sad but true. Some more straight-to-your-face parts would loosen up the sometimes too complicated tracks and would also enhance this DIY output. Krass-T´s vocalist is a real raging maniac, who could also lead a Grindcore band with ease. His style ranges from dark and hoarse grunting to high-pitched screams. It´s a pleasure to listen to his performance, but as mentioned before, it would all have been better if the songs were a bit more accessible to be truly efficient. Anyway, this is the bands first sign of life and I´m sure these French dudes will show their real qualities in the future and leave a lasting impression with their next offering. 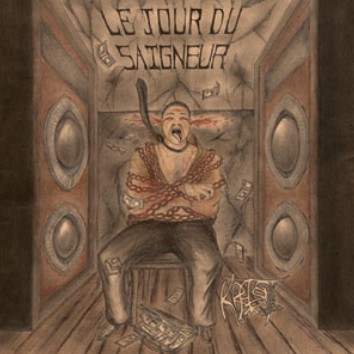