Kratein's debut album, 'Trauma,' is an esoteric and violent piece of black metal. A raging storm, to be exact. The album beings with an almost industrial setting by merging a bunch of spoken word samples, from men speaking to children singing a song, and then the music erupts into the harsh black metal. There are not titles to these tracks, just numbers, so the entire experience is meant to just sink in as the album goes by. Musically, tracks II and III are pretty much typical black metal white washed in distortion with the vocals sounding darkly evil and mysterious as they are somewhat drowned out (later on this effect appears stronger to add to the ambiance). The guitars buzz and burn like they would in a Satyricon song, every so often perform a melodic solo here and there, but for the most part the music is pretty much chaotic black metal, which is unfortunate because normally one would expect a bit more experimentation from ambient black metal artists, as Kratein like to call themselves.

The album has its moments though. "IV" is a pure acoustic instrumental that adds more than enough melody and peaceful bits to make up for the rest of the crushing desposition that the album brings, which makes it disturbing because fans won't know what to expect after the interlude. Tracks "V" and "VI" are much more experimental and will appease fans of the esoteric side of black metal; on "V" it feels like the completel opposite of the peace that "IV" gave: raging electrified riffs compounded on each other blast away and if the vocals are present, they're completely bombshelled in the mix which makes for a very twisted, almost black ambient track. Near the end though the keyboards sound like flutes, which adds an interesting twist to the music. Track "V" is pretty creepy because the vocals are present, but are more along the edge of whisper than anything else while the guitars are echoing on their own and plink away, almost out of tune, which adds all the more to the spooky tone of the track.

Still, fans may not consider this album 'traumatically' impacting as they might have expected. Rather than hear a ugly, disturbing piece of mental hospital black metal, 'Trauma' is more rooted in a typical black metal style with slight experimentation, but not as much as some might have hoped. Still, there are a ton of influences draped into this album that will appease fans from Darkspace to Satyricon to Xastur. The final track is most diverse of all as it features both harsh black metal overtones and also a great deal of melody, much as how Emperor would layer their music. So, listeners should expect some pretty violent stuff here; not enough to create a lasting nightmare, but enough to make the skin crawl without a slice. 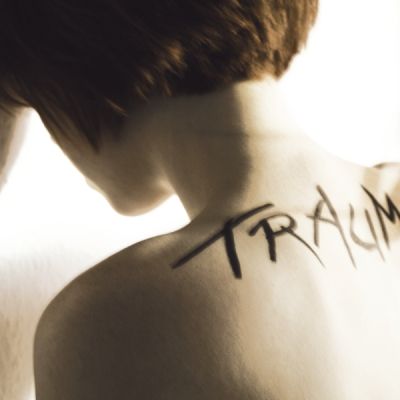