I've been harping on about modern thrash metal bands being a bunch of clueless tossers lately. A lot. My main complaint has been directed at all of the wanna-be clone bastards that think that listening to Exodus and Metallica forever will unveil the secrets to creating some of the best music the genre will ever have to offer, when matter-of-factly, it just creates more stale tripe to be thrown into what's an already over-saturated scene. So my painful begging has mostly consisted of the phrase "if you want some influence then listen to some fucking eighties hardcore, for Satan's sake!" whilst shaking my fist in the air - like Mr. Wilson just caught Dennis pissing on his lawn - and generally drinking myself into a stupor, watching a scene that I love oh so dearly falling victim to stagnation and talentless twats with neckbeards. So imagine my delight when I receive albums such as Three Minute Warning; for 40 minutes, everything is right with the world again.

Again, my prayers for more bands to embrace somewhat of a more hardcore punk approach (note: this doesn't mean copying Municipal Waste, you cunts) have gone mostly unanswered lately, with the exception of Visceral Attack and some nice subtleties from bands such as Virus, Anihilated and Onslaught so hearing Kremated's latest album was really a surprise. Their previous release, 2012's Total Warfare, was far from a bad release and functioned well as an indicatio nof what to expect from their next album (i.e. this one... obviously), but it did feel slightly bog-standard here and there. Three Minute Warning irons out the few flaws that Kremated had beforehand and gives it a dose of punk right up the arse, and in doing so, gives it a more solid and identifiable sound; in fact, I'm finding myself stuck in a state of ambivalence when it comes to Three Minute Warning. I'm really not sure whether or not to call it thrash or hardcore... yeah, there's a shitload of thrash in there, but the influence from bands such as Poison Idea, The Exploited, Discharge etc. is so apparent that it really walks the line.

Anyway, enough genre analysis; how does the album itself fare? Pretty fucking good for the most part, although it does occasionally fall victim to having slightly-longer-than-necessary tracks that, while fantastic overall, are noticably drawn out in places. Nothing that really detracts from the songwriting quality, it's just the occasional "Yes, we get it, we like that riff, get on with it" section that sullies the experience here and there. Thankfully, such occurences are rare. That aside, we have plenty of anthemic choruses and punky gang vocals, solos that are mercifully brief and well-placed and virtually nothing in they way of technical arrogance whatsoever... I'm quite shocked, frankly. Usually there's a big catch to albums of this quality, but aside from the aforementioned (and minor) length issues in places, Three Minute Warning holds up from start to finish in a pretty spectacular fashion without dipping in overall quality at any point. It's just brutish, in-your-face metal (punk?) that gets a big fucking gold star for daring to try and be different.

Buy Three Minute Warning if you're tired of the same old thrash metal shit (or if you're not, for that matter) and if you enjoy some of the harder-hitting punk stuff from the late eighties and early ninties. While it isn't the best album ever, it's a fucking cracking one that's given me a modicum of hope for the future of thrash metal... well, if other bands actually sit up and take notice, that is. 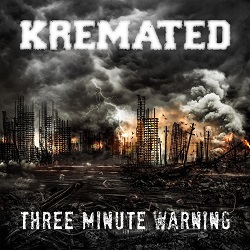