It is rightfully so that Kriegshetzer- which translates to Warmonger- unleash a hellstorm of a black metal album when it comes to their debut. Starting strong and ending strong, the music here is relentlessly brutal with hardly any interludes, melodic sections, or time to pause and take a breath. These two performers- Taragorm on drums and Anders on bass, guitar, and vocals- really do mean war! There hasn't really been a black metal album that hit this hard or sounded so effective in the heavier side of things since Marduk's 'Panzer Division,' which was also a heavily war themed album that sounded just as loud (a far cry from what they are today). Tracks on 'Panzer Vorwärts' like "Flamme Empor" and "Mutspruch" featur blazing guitars and tremolo pickings, blistering drums that could very well have been hammered out by a machine because they are inhumanly fast, and visceral vocals that are clear enough to be heard over the sonic hell. Speed is the key here with Kriegshetzer.

On the downside though, there isn't too much diversity to the music. With a lack of any distinct rhythms, interludes, or slower sections the entire album tends to bleed together for just one giant battlefield of music. It can be very difficult to tell the different whether one is listening to "Der Gott" or "Kameradschaft," which is a few tracks later. To hear the two is basically to hear the same track, which can be a bit of a dilemma. For those who appreciate over the top, insanely fast black metal that steamrolls its way along with no compromise, then this set up will do wonderfully. However, those who want a bit more diversity may want to seek something a bit more varied and less loud if they can't take the fury of Kriegshetzer's sound. The lyrics are in German and all of them are old German Landser-songs from World War 2. So there is a bit of a language barrier when trying to decipher the music, but more than likely it is all about war so all one has to do is sit back and enjoy the fireworks. 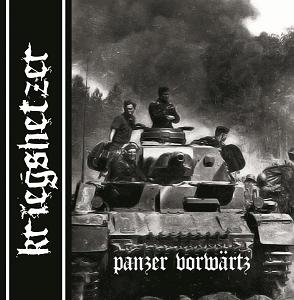