Before I listen to some music, from time to time I am looking for information about it on the internet, although it is not so important to me. Frankly speaking, it even spoils the impression. "I think that the band is playing in such and such, in certain and this style" - in each article someone tries to fit a group under a standard, "put into the Procrustean bed". Of the band Krigsgrav I found a bit: there was written "atmospheric black metal" and something like that. I have not broken off after this information: I would say that this definition is not far from the truth but it's all the same some confines! I could rant for a long time on this subject, but perhaps it's time to give attention to the band itself and their album.

About the "atmospheric" I in principle agree, but the atmosphere here is changing. I even read somewhere that this is "depressive black metal": I would not say that this is so. And if to speak about the atmosphere, it is possible to meet here as a fairly aggressive high-speed black metal as from it - until the longest losing streak on an acoustic guitar. The atmosphere of this album is hopelessness, pathetics, and epics.

Since we are all used to thinking some framework or cliché, I first identified Krigsgrav as one of the followers of the famous Swedish band Woods Of Infinity. However, perhaps it is a feature of our perception: at first see the big picture, then look closely and make out something in detail.

I really enjoyed of this album. Despite the fact that there is not very much left from the original black metal, based on the primitiveness and aggressiveness, but, nevertheless, pay tribute to the musicians, their literacy and, in particular, the talent, because without the latter all the previous is unlikely to have some meaning.

All melodies are built with a precise knowledge of harmony and, plus, the human perception of it - if of course such knowledge can be.

Here I heard even polyphony (an almost Bach) when bass leads their line, two guitars converge and diverge - well, in general, I was blown away.

This is only my feeling and, in principle, leaving behind all the insanity written, I say that it is just great music. For one I have listened to this album twice, but was never able give a clear definition.

But is it need? Is it necessary to define when you listen to the singing of birds, the rustling of the grass, the sound of wind in the trees or the avalanche, coming down from the mountains? Almost the same is here. So listen to black metal from Krigsgrav, and you will like it - or do not like. But, maybe, all birds should be shot down?? 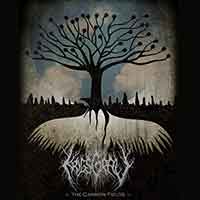