Thrashcore is a genre I've delved in before, with a small UK band called This Is Colour who sadly broke up before they reached their true potential. To see this genre spring back into action with La Horde's debut album "Dystopia" is nothing more than a blast of excitement to me. For a debut release, this album boasts of gratification; Probably not an album for any serious metaller out there looking forward to the next Slayer release, but still - the genre as it stands is that of the band embarking on a musical journey where their modern peers have such influence, that it spreads on this album. You can almost taste the level of prestige that Killswitch, Shadows Fall, and Unearth have given La Horde, whilst there also being a more punky - playful side to the band in which you can tell half the members are most likely into Municipal Waste.

I find the best new and upcoming bands are the ones who tend to mash their sound into something more productive, demanding, but also fun. La Horde at times take themselves seriously, just like their metalcore heroes, but at the same time their punky position only adds to the band's creativity side.

The riffs among these fourteen tracks are catchy. At times rioting out of control, but always staying faithful to the album's desired sound. Whilst most (If not all) the vocals are in French, this does not worry me. Having no idea what they're writing about doesn't bother me in the slightest. The vocals are gritty, and at times can become too predictable, but that's not to say the vocalist is bad. Infact, his style is almost relying on a hardcore vocalist's character, which surprisingly caters to the band's genre. This is helped with the great production on this album.

This band deserve more attention. The album is enjoyable and creative. Just like music should be. It's been done before but it doesn't lack anything important. Play loud, headbang, and repeat. 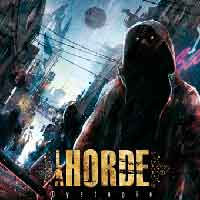