Laceration - Realms Of The Unconscious

Writing death-thrash is a very fine art with an exceptionally acute balance needed - those who manage it do it exceptionally well, but those who don't fall flat and sound rubbish. Perhaps this is the reason that there have been next to no real death-thrash bands and/or albums since about 1995, despite some former giants such as Protector continuing well into the turn of the millenium on a criminally low level before eventually giving up the ghost. So imagine my surprise when I was emailed this little gem - Laceration were only formed in 2006 and unlike many other wannabe death-thrash outfits, they pull the whole thing off damn near perfectly.

The first comparison people will make when hearing "Realms of the Unconscious" will be Demolition hamer, straight away. The writing style, structure, riffing, drumming, vocals... it's almost like a Demolition Hammer demo that never was, which is both a curse and a blessing. On one hand, such music is difficult to come by these days with only these guys and britain's Seregon really tapping into the death-thrash thing well, and this lot have a lethal execution. But on the other hand, the comparisons between Laceration and Demolition Hammer could end up lumping them in with countless other (admittedly failed) Demolition Hammer copycats... but that's not what I'm writing this for. We're here for the music, right?

As I just said, the Demolition Hammer comparisons are evident almost straight away - despite the first song having a nice eerie clean introduction, the minute the meat kicks in the band's influences become apparent. Vocalist Luke Cazares sounds scarily similar to Steve Reynolds, the bass is at justthe right place in the mix... hell, even the guitar tone reeks of "Tortured Existence" but it really adds to that nostalgic feeling that you seldom get from modern thrash bands anymore. These fellas have perfected the art of brutality and have obviously put a lot of careful thought into the three songs present here both in terms of songwriting and production - you could even say that the production is reminiscent of Scott Burns' work to degree, with a nice bassy and warm sound to it yet still full of crunch. Though saying that, the overall mix feels a bit dry and slightly hollow to an extent. The songs themselves move at breakneck speed for almost the entire duration of each, especially on the closing colossus 'Shadows of Existence' and these dude really tighten their grip, not letting go until they're done pummeling you with the barrage of riffs they have in their arsenal - that's the way it should be. Guitarists Joey and Luke are immensely talented with Corey and John (bass and drums respectively) provide a solid rhythm section, with very precise and clean execution through and through which is rather impressive considering all three songs are five and a half minutes long.

But of course, it's not all good news. As I've just stated, each song is five and a half minutes plus which can lead to a degree of repetition - two thirds through a song you kind of lose track of what's going on, and for a three song demo/EP having every song breach the five minute mark is really going to test the listerners' patience. On a full length album this would potentially be acceptable but this lacks the short and snappy bursts of aggression that death-thrash requires, and in turn this creates the problem of the CD being too short. Had the band recorded, say... five or six songs, including the three we have present here and two or three shorter tracks then this would be infinitely easier to get into. As it stands, "Realms ofthe Unconscious" is still a fantastic achievement with some devastating musicianship present - the inconsistancies with production and issues with length just hinder it from being incredible as opposed to really fucking good. Provided Laceration can erase those problems, they'll be unstoppable in every sense. I for one am really looking forward to seeing what else they have to offer, so pick up this demo/EP if you love brutal death-thrash. 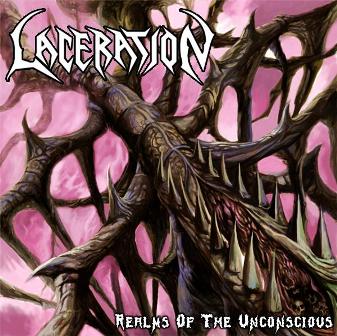 1. Realms Of The Unconscious
2. Self Deprivation
3. Shadows Of Existence