A new release from Scottish one man death metal band Laceration and out on the relatively new UKEM records from England. Laceration used to be a three piece band but for whatever reasons is just now down to the very talented Hamish Maguire, what you get here is a compilation of previously released Laceration material and some live tracks, 1-3 are from the 2011 demo, the next two are from “Condemned to Torture” demo from 2011 and the last three are live from the Glasgow Death Metal Tea Party form January 2012. So a bit of a mixed bag but a very good introduction to the band, a brutal death metal band that pretty much deliver what they say!!  Any band that has a track called “Human Tikka Masala” has to be the dogs bollocks!! And not only do you get the original version of this wee masterpiece you also get the live version, lovely stuff! The whole album kicks off “Traumatic Insemination” and it doesn’t let up form that moment onwards, it lasts at just under 24 minutes so you can see that it will not take up too much of your life! All the tracks have a slowish doomy start to them before they explode into some pure DM heaviness, Hamish is a talented guy and certainly gets a great sound out of his guitar a man to look out for!  My favourite tracks are the opener “Traumatic insemination and “Gorging on Putrid Orifices” great title! but it’s all good. If this is your particular bag you wont be disappointed with this purchase, I am pretty much a sucker for brutal death metal and also love one man bands so this ticks all the boxes for me, buy it and support a new record label too! I be looking forward to hearing more from Laceration real soon! 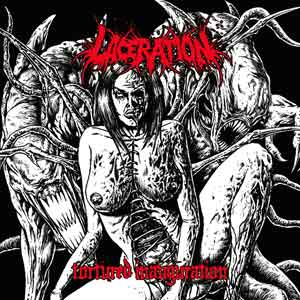