Laetitia In Holocaust are a bit of an enigma amongst Black Metal fans. Their sophomore effort 'Rotten Light' doesn't hit hard or feature the typical sounds of Black Metal, such as tremolo picking or drums that feel like their in overdrive. No, this album is actually very quiet and progressive... a nearly simplified acoustic effort where the only thing 'Black Metal' about it are the harsh vocals. The album opens with "Dialogue With The Sun" which just features some electronic buzzing- a very ambient beginning- before the guitars come in with the drums in the background, slow and percussive. The music is highly melodic, and when the vocals come in switching between their snarls and whispers, they feel just right for the music without any interference with the rest of the composition at all. There are some electric guitar moments near the end of the song, but overall the feeling is simply just a laid back, acoustic tone that will either seem pleasant or repetitive. That's a bit of the downside of the album.... repetitiveness. Almost every track is built the same way, sounding beautiful but at the same time stripped down and slightly limited on the range that both men in this band bring to the band. Faster tracks like "Black Ashen Aurora," which features a more frantic pace on the guitars and a bit more from the drums, which overall gives the music a more general Black Metal feeling, still ring hollow with that acoustic sound and it only stirs a bit from the listener, as opposed to making them really want to get up and move.

Sometimes this unique approach to Black Metal does have its advantages, however. "Le Perdu De Novembre" does a great job at switching between fast and slow, carrying a progressive pace which makes this instrumental a highlight of the album, sounding like something that would come from recent Opeth. It is rare to see Black Metal ever delve into an area that is so passive despite its typical 'raging nature,' so Laetitia put it to use. Sometimes the passivity can be a bit too much like on "Sulle Soglie..." which is almost Funeral Doom Metal pace with the vocals whispering in the background- an interesting effect but it only increases the hypnotic effect that may put people to sleep. The only real 'furious' part of the whole album comes from the end of the final track "The Inaccessible Door" which feels like a monster waking from its long sleep and just going beserk on everything around it, with full on blastbeats from the drums and electrified tremolo picking on the guitars. It will certainly wake up anyone who has fallen asleep through the album at this point. Overall, 'Rotten Light' is a more eclectic, experimental offering that might get under purists' skin, but those who have an open mind about Black Metal would do justice to check it out and see how the softer side can be just as haunting as the faster part. 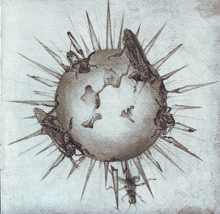