Lagrima - Gilgamesh (The Guest for Immortality)

There are only a handful of bands I have in my collection from Lebanon and I am sure that it must be challenging to be an extreme metal band in the country alongside other acts such as Blaakyum, who I saw at 2017’s Bloodstock Open Air, Ayat and Kaoteon both of whom I have reviewed albums by before. Lagrima are a two piece project fronted by Ayman Ayvval Aloush on vocals and Tarek Yazbek on guitar, bass, synth and drum programming and within this project they previously released an album titled 'Hannibal ad Portas' in 2012 which is available to download on their Bandcamp page at a name your price. With the gap being six years between that release and this new album comparisons are moot in my opinion as you have probably guessed that the concept of this new opus is Gilgamesh and specifically the poem called ‘Epic Of Gilgamesh’ written about Gilgamesh who was a Sumerian king.

This is an epic album with highly evolved song writing that begins with a length intro piece titled 'Prelude (King Of Uruk)' which sets the scene superbly. The riff is excellent, extremely catchy and stays well clear of being a typically calm intro style building steadily with various riffs towards main opener 'The Rival (Creation Enkidu)' which erupts smoothly with a piercing riff. The blackened manifestations of the vocals are caustic with occasional deathly bellows adding texture as the song diverts briefly into quicker phases without blasting. The track swerves into an acoustic passage suddenly and it does take some time for the way the band writes their songs to sit comfortably in your head as the track returns to melodic black metal realms. Interestingly the band has opted to go for the three longest songs at the start of the album with 'Slaying The Guardian Of The Cedar Forest' continuing with a salvo of programmed drum fills that work well. The song has a deathly feel initially before it switches to a cleaner riff and it is these ever fluxing riff changes that make the songs stimulating with constantly moving pace dynamics shifting focus also.

I am not a lover of long albums, and I will admit my attention span on this album did waver on 'The Lure And Rage Of Ishtar', the other very long track but perked up with the quirky riff part way in on 'As The End Of Enkidu Comes', which fires out snare blasts. The riff breaks are perfectly poised also with the rasping vocals adding plenty of menace to the bristling track sees that aggression amplified. 'The Quest' is split over two parts beginning with a semi acoustic piece before it detonates with possibly the most violent track on the album as a fine guitar hook blazes in maintaining a rampant tempo that gives way to the acoustic guitar for the second part very fluidly and emotively. The lead break is good, passionately played as a chunky riff follows it momentarily before a wave of more solos are beckoned. Crushing the listener is 'The Great Deluge' with a punishingly low end riff and thrusting bass and drums, the track has an ethnic like tone to the riff.  You can feel the track building sequentially, but to what you just don’t know, the tension is escalating but instead of the expected blast it shifts to a new but very catchy riff and leaves only the beautiful outro 'Mortal You Shall be' to make its lasting impressions on you.

Whilst this is a musically accomplished album I’d be remiss to say it is faultless despite my superlative on the songs I’ve talked about.  At times my attention did wander but when it didn’t the album was extremely captivating but I did feel some aspects were overdone but be that as it may, this album is a very good listen, with great musicianship, ambitious arrangements and a creative vision and for that reason Lagrima are very much worth investigating. 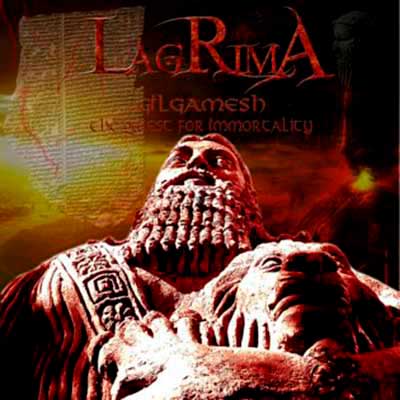